Let's Split! is an atlas of separatism, national identity, and fringe geopolitical movements 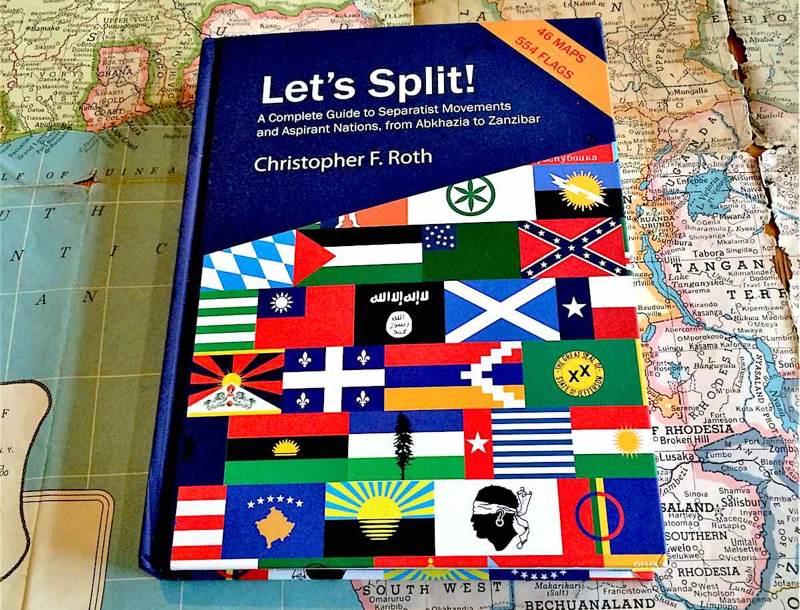 Let’s Split! causes me no end of joy and pain. It is my favorite Nietzsche quote come to life. (“Madness is rare in individuals – but in groups, parties, nations and ages it is the rule.”) It is also a 636-page atlas of separatism, national identity, fringe geopolitical movements, and a baleful cry from oppressed minority populations.

The book is put together with the obsessive care of an eccentric Victorian explorer documenting each step of his journey through uncharted lands, never stopping to discern between the observed real and the observed surreal. But Roth is no Victorian. He’s an anthropologist who’s worked with indigenous peoples in Canada and Alaska for governmental recognition and rights. Let’s Split! began life in 2011 as a blog that Roth maintains titled Springtime of Nations. (Full disclosure: by some trick in the time/space continuum, author Roth lives just a few miles from me and we have friends in common. I found this out after I discovered his blog and book.)

Conceptually, the idea of a nation-state is relatively new in the spectrum of development of human societies. People were once few on the earth and tended toward the homogeneity of tribal affiliation. As populations grew, coalitions, hegemony, and politics took shape both psychologically and politically.

Organized by continent, Let’s Split! leaves no territory behind. (Though Roth rightfully excludes "cybernations" and the giggling masses of "micronations" invented by bored teenagers declaring their basement lairs sovereign territory no longer oppressed by the evil overlords, Mom & Dad.) Included with each entry are pictures of the flags, potential population, geographic size, and finally, its likelihood for autonomy.

And this is where Let’s Split! transforms into something beyond a history, an atlas, or a dry-as-dust encyclopedia. Entries for the Eastern European region ripple with references to long-forgotten kingdoms and internecine rivalries. We follow the migrations of the Mongols and the surge of conquerors to the painful remnants of a peoples’ history written in blood. Understanding these thousand-year-old grudges makes the all-too-many modern skirmishes throughout the world profoundly real.

Let’s Split! is loaded with enough facts and minutiae to delight history geeks yet remains highly readable. Let the pages fall open and you’ll be immediately drawn into the conflict within. Make no mistake, a guide to breakaway states and freedom movements is rife with conflict and suffering. As Westerners, it’s all too easy for us to sit in judgment as chaotic events in other parts of the world are blipped onto our screens, then summarily dismissed. But please don’t let that, nor the high price dissuade you. (Though I would love to see a lower priced paperback edition.) Let’s Split! is a worthy addition to your library.

Let's Split! A Complete Guide to Separatist Movements and Aspirant Nations, from Abkhazia to Zanzibar