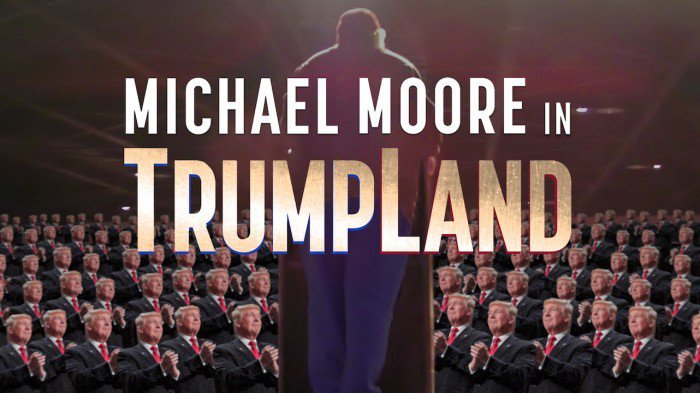 Filmmaker Michael Moore has an “October surprise” for America: A stealthily and quickly made movie about the presidential campaign of GOP nominee and accused serial sexual predator Donald Trump.

Tickets are free, available at the theater box office starting one hour before the screening. Details at IFC website.

See the film Ohio Republicans tried to shut down. Oscar-winner Michael Moore dives right into hostile territory with his daring and hilarious one-man show, deep in the heart of TrumpLand in the weeks before the 2016 election.

The part about “Ohio Republicans” is a reference to his attempt to stage and film Michael Moore in TrumpLand at the Midland Theatre in Newark, Ohio. Moore has said the venue pulled out at the last minute because they considered Moore “too controversial,” although the theater maintains that a contract was never signed and that they turned him down for several reasons including a lack of advance notice. Moore eventually wound up performing and filming the show at the Murphy Theater in Wilmington, Ohio instead.

Moore’s firmly anti-Trump stance is bound to spark criticism and controversy, but that’s nothing new for the politically active filmmaker. Perhaps the most shocking thing about Michael Moore in TrumpLand is just how successfully he’s managed to pull a Beyoncé. I can’t remember the last time a film has been announced and released theatrically in the same week. It’s rare even at film festivals. TrumpLand will be Moore’s second release of the year, after last winter’s Where to Invade Next.

Far less surprising is that Moore is not exactly a fan of Republican nominee Donald Trump. He’s so against Trump, in fact, that he’s even announced he’s breaking his vow to never vote for Hillary Clinton. (He’d previously made that promise in reaction to her support for the Iraq War.) “For the sake of preventing a proto-fascist from becoming our commander-in-chief, I’m breaking that promise,” he wrote on his site. “She’s a hawk, to the right of Obama. But Trump’s psycho finger will be on The Button, and that is that.”

Michael Moore in TrumpLand hits theaters around the U.S. on October 19. Election Day is Tuesday, November 8. Please vote, and encourage other Americans to join you.

Yes, some rumors may be true. I "might" be putting the finishing touches on an "October Surprise" for this election. Then again...

What's this? Something is cooking! Final night in the "kitchen." #OctoberSurprise pic.twitter.com/eNX7LwxK5p