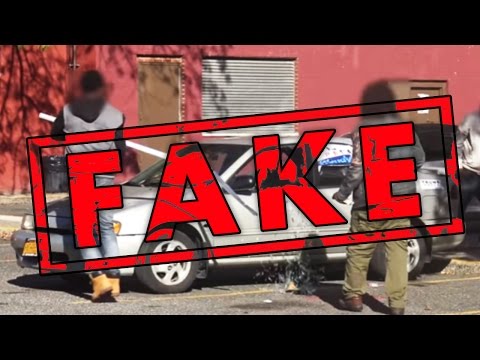 Remember Joey Salads, the "social experiment" guy who made a candid camera style video that showed him at a bar, sneakily dropping pills into women's drinks? He said he did it as a public service, but he came across as a self-aggrandizing creep who enjoys butting into other people's lives.

Well, Mr. Salads is back in the news, this time for getting caught shooting a staged video that shows a group of black men vandalizing a car with Donald Trump stickers on it. Mr. Salads, an ardent Trump supporter, posted the video on his popular YouTube channel, concluding, "As you can see from this video, the black community is very violent towards Trump and his supporters." Subscribers on his YouTube channel and on his Twitter account went nuts, posting racist comments about the "vandals."

Unbeknownst to Mr. Salads, someone shot video of of Mr. Salads staging upthe incident, and posted it to Twitter, exposing Mr. Salads as a fraud. The "vandals" were accomplices following Mr. Salads' instructions to damage the car (which had been parked in a "black neighborhood" by Mr. Salads).

After it became clear to Mr. Salads that his sham had been exposed, he posted a smarmy, excuse-filled, laughably insincere, sorry-I-was-caught, bullshit apology:

Mr. Salads gets bonus points for running ads on the fauxpology video. He gets double bonus points for ending the video by declaring his intention to commit voter fraud by voting three times in the upcoming election.

Here's H3H3 Production's take on Mr. Salads, which calls into question the veracity of all of the many racist "social experiment" videos that Mr. Salads has made:

After the July 3 suicide bomb that killed 300 people in Baghdad, Prime Minister Haider al-Abadi banned the use of the ADE 651. a fake bomb detector made by British fraudsters, who claimed the gadgets could detect bombs, ivory, drugs, and golf balls. The Iraqi military had purchased $60 million worth of the bogus devices. […]