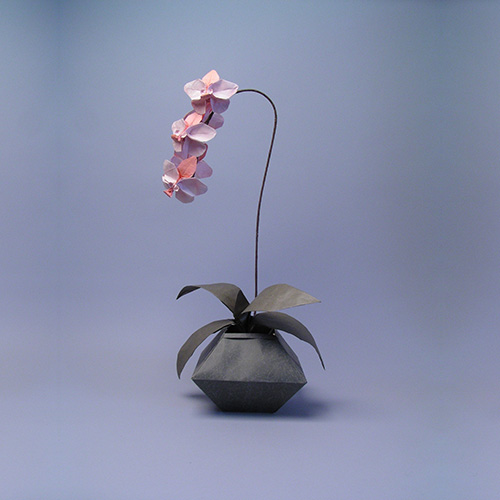 The exhibition's trying-too-hard title is flORIlegium, but the work is worth checking out:

The Japanese art of origami comes alive in a new exhibition of approximately 25 original works by the internationally renowned master Robert Lang. The exhibition takes its name from the Latin word florilegium, which literally translates as “a gathering of flowers.” During the horticultural Age of Discovery in the 17th and 18th centuries, the word referred to lavishly illustrated books of botanical art. Lang revisits this tradition through an exploration of the flora and fauna of The Huntington as reimagined through the medium of intricately folded paper. “By manipulating the fundamental element—the uncut sheet—via the fundamental action—the fold—we create line and form reminiscent of entities from the natural world while preserving the integrity of the initial sheet,” said Lang. The apparent simplicity of that statement is belied by the complexity of his creations, which include the spiny likeness of a cactus made from a single uncut sheet.