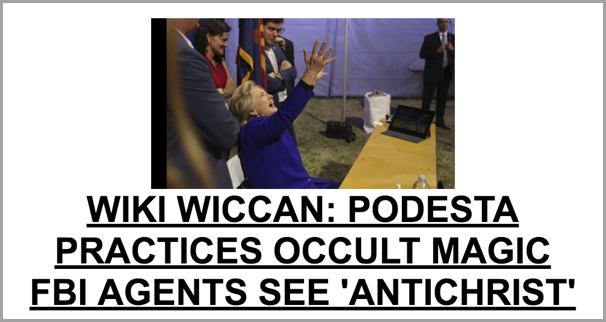 The Podestas' "Spirit Cooking" dinner?
It's not what you think.
It's blood, sperm and breastmilk.
But mostly blood.https://t.co/gGPWFS3B2H pic.twitter.com/I43KiiraDh

Here's a chunk of the Infowars item, citing Julian Assange and Wikileaks:

In what is undoubtedly the most bizarre Wikileaks revelation to date, Clinton campaign chairman John Podesta was invited to a “spirit cooking dinner” by performance artist Marina Abramovic, to take part in an occult ritual founded by Satanist Aleister Crowley.

What is “spirit cooking”?

Spirit cooking refers to “a sacrament in the religion of Thelema which was founded by Aleister Crowley” and involves an occult performance during which menstrual blood, breast milk, urine and sperm are used to create a “painting”.

The video embedded above depicts the bizarre nature of the ceremony. Abramovic mixes together thickly congealed blood as the “recipe” for the “painting,” which is comprised of the words, “With a sharp knife cut deeply into the middle finger of your left hand eat the pain.”

The ceremony is, “meant to symbolize the union between the microcosm, Man, and the macrocosm, the Divine, which is a representation of one of the prime maxims in Hermeticism “As Above, So Below.”

“Abramovic is known for her often-gory art that confronts pain and ritual. Her first performance involved repeatedly, stabbing herself in her hands. The next performance featured her throwing her nails, toenails, and hair into a flaming five-point star — which she eventually jumped inside of, causing her to lose consciousness,” writes Cassandra Fairbanks.

Another image shows Abramovic posing with a bloody goat’s head – a representation of the occult symbol Baphomet.

The revelation that John Podesta, Hillary Clinton’s campaign chairman, is presumably interested in weird, gory occult ceremonies was too juicy for even Wikileaks to ignore.

“The Podestas’ “Spirit Cooking” dinner? It’s not what you think. It’s blood, sperm and breastmilk. But mostly blood,” the organization tweeted.