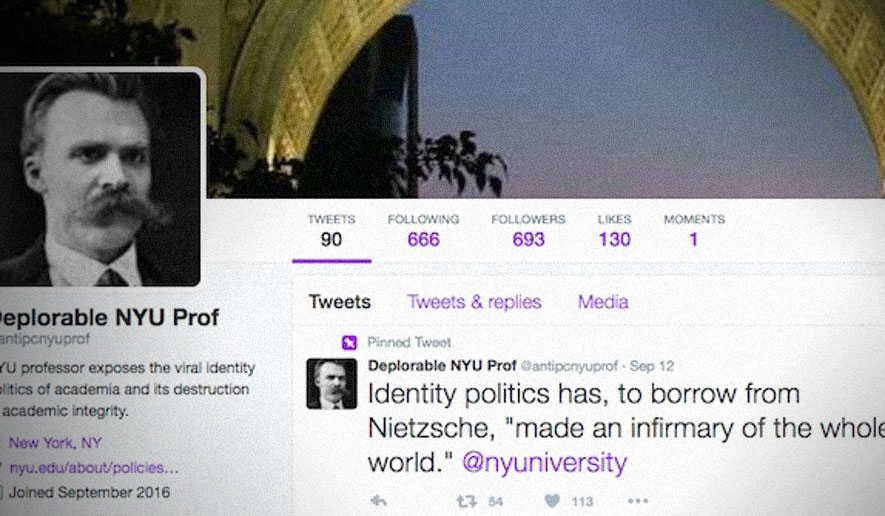 Michael Rectenwald, a 57-year-old untenured NYU professor, was placed on paid leave. He, and various conservative websites, claim that he was forced out for mocking political correctness. Was he? Apparently not.

What actually happened, as Jesse Singal writes up: Rectenwald tried to build an anonymous online following with the intent to attack and damage his employer, quipped that he hoped his students would kill themselves, decided to out himself for attention, found the consequences not to his taste, asked for paid leave, told the press he was told to leave, then got snarled when his employer found itself free to publish some relevant internal correspondence.

Rectenwald promised that those who helped him build up an online following would be rewarded when he cracked open NYU's seemingly innocuous artsy, druggy shell to reveal the foul viscous yolk of SJW corruption within:

I'm a real full-time NYU prof who has inside stories that will blow yr mind. When I reach 500 followers the flood gates open. Pls help. Thx.

What if Trump triggers a few hundred thousand liberal totalitarians to jump out of their dorm windows? one can only hope. #TriggerWarning

Singal sets out to balance it all against the liberal outrage generated–there was even a letter to the editor published in a student newspaper!– but the UPDATE is fabulous.

Update, 11/3: NYU has released a three-email correspondence between Rectenwald and Fred Schwarzbach, dean of his department. In the emails, Schwarzbach expresses dismay and confusion at how Rectenwald has portrayed the circumstances of his leave to various media outlets. His first email begins, "I must tell you that I was surprised by public accounts you have given for your leave, in which you have either claimed you were forced to take leave or have left the implication that that was the case."

What better signifier of doomed middle-aged mediocrity could there be than the thought "I know, I'll start an anonymous Twitter account with the word "deplorable" in the name and a Nietzsche avatar!" There isn't even a decade-old meme like Deal With It Sunglasses superimposed on it.