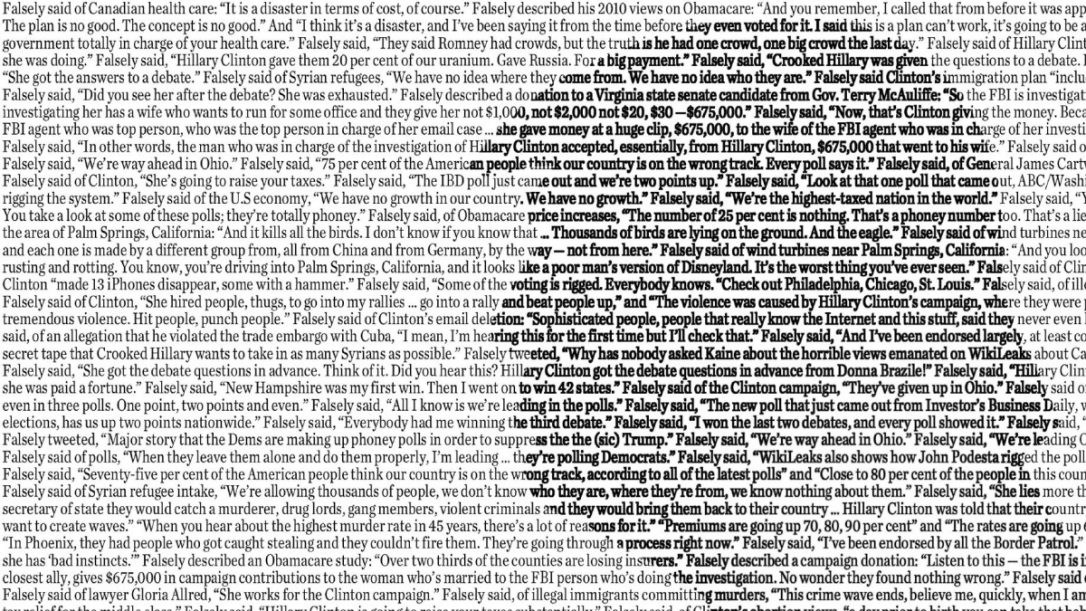 Daniel Dale is the Washington Bureau Chief for the Toronto Star; for the duration of the campaign, he's been compiling daily lists of Trump's lies: now, with the election days away, the Star has put these together in one gigantic list, with citations refuting each of Trump's whoppers.

The piece is accompanied by a 10-point essay categorizing Trump's lies and distortions into such buckets as "the rigged electoral system"; "inner cities are dangerous hellholes"; "Hillary Clinton created Daesh" and, of course, "WTF?"

Palm Beach, Fla., is “probably the wealthiest community there is in the world.” — Sept. 26

Trump’s Mar-a-Lago club is in Palm Beach, and it is undoubtedly an ornate, exclusive place. But Palm Beach is nowhere near the wealthiest community in the world — it’s not even the wealthiest in the United States (it’s No. 3).

This is easy to dismiss as simple hyperbole, but it fits in an unusual category of Trump falsehoods: Ones that are ridiculous, and ridiculously obvious.

A week earlier he falsely said of a pastor who interrupted his criticism of Clinton: “He’s not allowed to talk politics. If he does, they take away his tax exemption.” (Pastors are permitted to “talk politics” as much as they want, although they are prohibited from endorsing or opposing candidates.)

Perhaps Trump was simply displaying his thin skin here. Or perhaps his ignorance.

But there seems no benefit to such outlandish statements. Trump just seems unable to not say them.