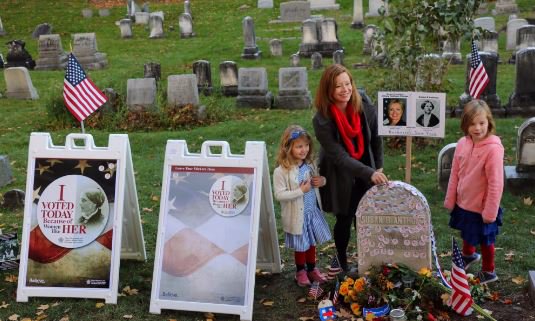 Suffragist and one-dollar-coin model Susan B Anthony put her life and freedom on the line to win the vote for women in America, but she never got to cast a ballot herself.

The mayor of Rochester, NY has decreed that the Mt. Hope Cemetery, where Anthony is buried, will stay open extra late, so that women (and men!) who've voted can place their "I Voted!" sticker on Anthony's grave as a memorial and appreciation for the fights that Anthony and her comrades fought so bravely and so fiercely.

Mt. Hope Cemetery, where Anthony is buried, usually closes at 5:30 p.m., but on Election Day, it’ll be open until voting ends. “Visiting Susan B. Anthony’s gravesite has become an Election Day rite of passage for many citizens,” Rochester’s mayor told the paper in a press release. “With this year’s historically significant election, it seems right to extend that opportunity until the polls close.”

So Many Women Put ‘I Voted’ Stickers on Susan B. Anthony’s Grave That the Cemetery Is Staying Open Late on Election Night