Remember when they told us Hillary, not Bernie, would beat Trump? 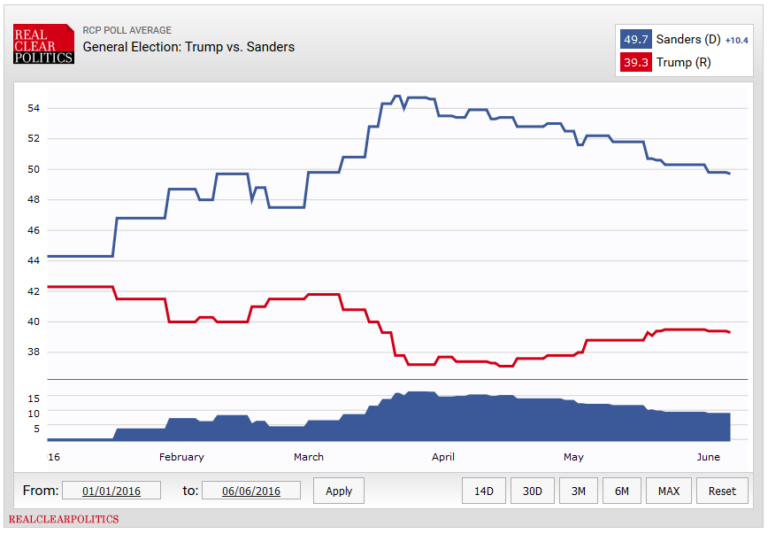 American politics now: the anti-establishment, white-nationalism troll party and the pro-establishment party that thinks you'll vote for them because you fear white supremacists more than you hate the trolls.


American politics tomorrow, if we address ourselves to the work at hand: the terrified troll white-nationalist party versus the party of hope, change and rebuilding: "dismissing a major indicator of popularity like polling—a key tool of campaign journalism in virtually all other contexts—due to vague, handwaving claims of unvettedness comes across as far more a convenient talking point than an earnestly arrived-at conclusion."

“Republicans hate Hillary, Democrats love Hillary and independents are unsure. It may well be that Hillary Clinton has an image problem that she needs to work on, but it’s pretty much the same image problem she’s had forever.” —Kevin Drum (Mother Jones, 9/15/15)

*
“All politicians get battered the more they’re known. Maybe that won’t happen to Bernie, but I think it will…. [Sanders] hasn’t spent 25 years in the spotlight being trashed by what I would also call the vast right-wing conspiracy.” — The Nation’s Joan Walsh (WNYC, 3/1/16)

*
It’s true that Sanders does better than Clinton in hypothetical matchups against the Republicans…. But that’s not because Sanders is the stronger nominee. It’s because Republicans haven’t yet trashed him the way they’ve trashed Clinton. Once they do, his advantage over her would disappear. —William Saletan (Slate, 4/26/16)

*
“It is true, as Sanders pointed out, that polls show him doing better than Clinton against Republicans in November. But it is also true that Clinton has not hit Sanders with a single negative ad. Not one.” — Michelle Goldberg (Slate, 5/2/16) [This statement was false, by the way.]