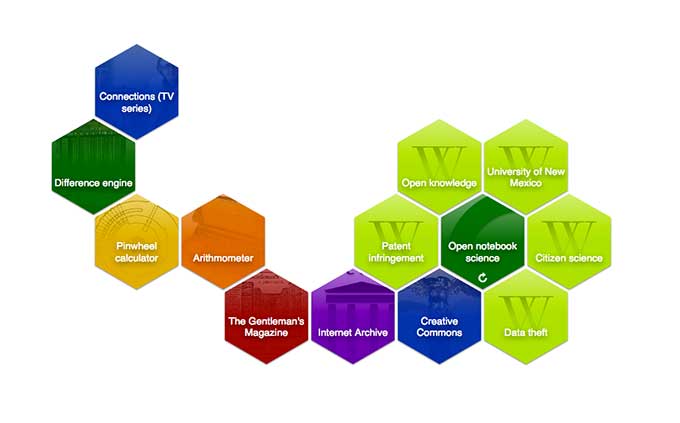 In this episode of the YANSS Podcast, we sit down with legendary science historian James Burke, who returns to the show to explain his newest project, a Connections app that will allow anyone to search and think “connectively” when exploring Wikipedia.

He launched the Kickstarter for the app this month. This is a link to learn more.

For much of his career, science historian James Burke has been creating documentaries and writing books aimed at helping us to make better sense of the enormous amount of information that he predicted would one day be at our fingertips.

In Connections, he offered an “alternate view of history” in which great insights took place because of anomalies and mistakes, because people were pursuing one thing, but it lead somewhere surprising or was combined with some other object or idea they could never have imagined by themselves. Innovation took place in the spaces between disciplines, when people outside of intellectual and professional silos, unrestrained by categorical and linear views, synthesized the work of people still trapped in those institutions, who, because of those institutions, had no idea what each other was up to and therefore couldn’t predict the trajectory of even their own disciplines, much less history itself.

In The Day the Universe Changed, Burke explored the sequential impact of discovery, innovation, and invention on how people defined reality itself. “You are what we know,” he wrote “and when the body of knowledge changes, so do we." In this view of change, knowledge is invented as much as it is discovered, and new ideas “nibble at the edges” of common knowledge until values considered permanent and fixed fade into antiquity just like any other obsolete tool. Burke said that our system of knowledge and discovery has never been able, until recently, to handle more than one or two ways of seeing things at a time. In response we have long demanded conformity with the dominant worldview or with similarly homogenous ideological binaries.

My favorite line from the book has to do with imagining a group of scientists who live in a society that believes the universe is made of omelettes and goes about designing instruments to detect traces of interstellar egg residue. When they observe evidence of galaxies and black holes, to them it all just seems like noise. Their model of nature cannot yet accommodate what they are seeing, so they don’t see it. “All that can accurately be said about a man who thinks he is a poached egg,” joked Burke, “is that he is in the minority.”

You may have noticed that when we browse the news or type into Google we tend to seek confirmation more than we do information. We predict our current model will remain untarnished. When we want to make sense of something, we tend to develop a hypothesis just like any scientist would, but when we check to see if we are correct, we often stop once we find confirmation of our hunches or feel as though we understand. Without training, we avoid epiphany by avoiding the null hypothesis and the disconfirmation it threatens should it turn out to be valid.

Since the 1970s, Burke has predicted we would need better tools than just search alone if we were to break out of this way of thinking. His new app aims to do that by searching Wikipedia “connectively” and producing something the normal internet searches often do not – surprises, anomalies, and unexpected results.

With the app, one would be able to pick two seemingly unrelated ideas, people, objects, events, inventions, works of art, or whatever, and then watch as the artificial intelligence carves a visual path through the articles on Wikipedia and forms a series of interactive nodes linking them. Each node can then be explored or summarized, and the whole chain can be saved or shared. Users would also be able to carve their own paths, visualizing the possible links at each stage, or choose a single topic and watch as the app delivers a selection of possible endpoints, some expected, and some bizarre.

“It’s a way, in a sense, of turning the fairly linear material in Wikipedia, that is to say much of what you find in Wikipedia tends to be connections between people that you would have expected, such as chemists knowing chemists and so on, and to turn that into more of an interactive knowledge web,” said Burke. “If that were to happen, that would be an intriguing enrichment of what Wikipedia offers.”

When I got a chance to play with the preliminary version of the app, I started with Charles Darwin. After typing in his name, a hexagon appeared with six possible paths I could take. Those paths could be reset as many times as I wanted, but I chose to go off in the direction of natural selection which collapsed the other branches and created a new hexagon with the Charles Darwin node still attached. The new hexagon offered six new paths, and on I went down a chain of connections until I arrived at Frankenberry Cereal. That might seem like just a bit of fun trivia, that Darwin and Frankenberry are linked together in an academic six-degrees-of-separation sort of way, but along that path I learned how advances in biology led to the mass production of gelatin. That took me to the history of pectin, fruit roll-ups, and something I had never heard of before called “Frankenberry Stool,” the pink poop that comes from eating too much monster-based manufactured breakfast which caused a short-lived health scare in the early days of artificially dyed food.

In the 1990s, Burke began working on a Knowledge Web, a mostly invite-only, experimental interactive media project built on the same principles as his approach to the history of science, innovation, and change. The K-Web allows users to visualize and navigate information outside of the way it is presented in books or libraries, and to move between nodes connection in a dense, interconnected sprawl, like neurons wired together into tethered constellations of association and influence. Today it features 2,800 people linked 30,000 ways, but the Connections app would apply the tools developed in that project to the megastructure of Wikipedia, adding five million new nodes with a yet-to-be-estimated number of new links between them.

Richard Ingram, a professor of Educational Technology at James Madison University is heading up the dev team working on the project. Ingram said that should the Kickstarter be successful, a portion of the revenue from app sales will be donated annually to Wikipedia itself and “James himself asks that he receive no compensation.” Instead , he wishes for sales to go to his non-profit to help distribute the app so that it can be used in education.

I asked how Burke hoped people would use the app, and he said, first of all, if the campaign falls through, no one will use it for anything, but if it does, he said fun and silliness in his view are justified ends unto themselves. Aside from those goals though, he said he had “always found that reading in widening circles around a person and seeing what contacts they made, the people they knew, the influences they caused or suffered, quite often the most interesting things happened when you went to an anomaly, an outrider if you like.” For example, an engineer might only have friends who are also engineers with the exception of a painter or a pilot. “Go there, because the whole process of change, and prediction, and handling innovation, which is why I started the K-Web and this app in the first place, tends in general to be a surprise.”

A prototype of the app

The Day the Universe Changed

And now, a ditty about the guy who bought up 17,700 bottles of hand sanitizer in Tennessee

That nasty price-gouging dude who hoarded over 17K bottles of hand sanitizer (to jack up the price and sell them on Amazon), a) has donated all of it to charity, and b) has had a song written about him. It’s called “Family Businessman” and it’s by Tennessee duo Good Cop/Rad Cop — enjoy! screengrab via […]

Look kids, it's a tour of the 1950 A.C. Gilbert Radioactive Atomic Energy Lab Kit, now with seven sources of radiation!

I have always been intrigued by the Gilbert U-238 Atomic Energy Lab Kit that was only sold for a year, starting in 1951. The kit included a Geiger counter, a Wilson cloud chamber, a spinthariscope, a electroscope, and a comic book in which Archie splits the atom. It also came with three sources of radiation […]

It wasn’t all that long ago that Westwood Studios Blade Runner adventure game for Windows computers became available again for the first time since the late 1990s. For decades, the game’s source code and other assets were thought to have been lost by Westwood, due to a series of unfortunate events. But it turned out […]

Productivity isn’t just about working smarter or faster. It’s actually about making you a happier person. Ninety-two percent of employees said that having the right technology to help do their job with greater efficiency actually made them happier in their work. And the real question here is — what’s up with those other 8 percent? […]

If you’re a child of the 20th century, you grew up playing with blocks, dolls, action figures or some assortment of those traditional toys. But for a kid of the 2020s, they’ll be able to say, “When I was a kid, I built my own phone.” It’s a wonderful time to be alive, right? As […]

There are few experiences that match the sheer raw power of being front and center for a huge rock concert. It can be exhilarating. But without sounding too much like your mom, it can also be far more dangerous than you realize. Hearing damage often happens from exposure to prolonged loud noises over 85 decibels […]