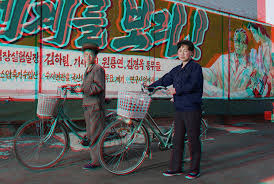 North Koreans have a fondness for lenticular postcards and stereoscopic keepsakes, and they granted Slovenian photographer Matjaž Tančič rare access to create a series of 3D photographs of North Korean daily life.

While the photos are far from candid and taken under the watchful eye of two guides, this video shows an interesting behind-the scenes look that is often more interesting than the photos themselves.

3DPRK: PHOTOGRAPHING NORTH KOREA is a never-before-seen examination of the process behind such cultural engagement projects between international artists and local North Koreans. The small team of five (photographer, producer, two North Korean guides, one driver) photographed soldiers at the tense Demilitarised Zone at the North-South Korean border, and visited the schools, hospitals and newly completed leisure facilities considered the pride of the reclusive state, with producer Vicky Mohieddeen filming the process every step of the way. The resulting series of portraits is the first time that local people from across the country have been photographed using a 3D stereoscopic technique. This landmark collection shows not only the relatively oft-photographed citizens of Pyongyang – North Korea’s showcase capital – but also those toiling in the fields of the co-operative farms, those living in Hamhung (North Korea’s second largest city) and those working in factories and steelworks across the country.