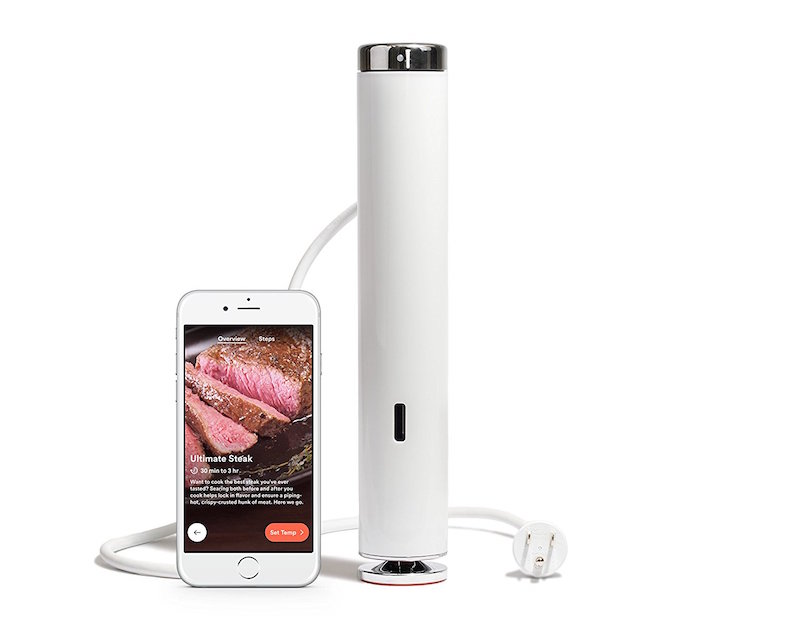 ChefSteps Joule sous vide eliminates all the niggling inconveniences of other models and turns sous vide into a really useful, everyday technique. I've been cooking with it for months now, and I'm in love.

Sous vide cooking is a method of bringing the foodstuffs you want to eat up to their cooked temperature in a gentle bath of heated water. The protein changes are more predictable, flavors far bolder and less cooked out, textures not destroyed by high heat. I love the results sous vide produces but even the best of last years circulators kept it as an every-so-often technique.

The containers I found I had to use to match up with the depth, clips and mounting hardware of most units was a total pain in the butt. Over time I settled on using an igloo cooler with the then favorite circulator. It was larger than I wanted to keep in my kitchen, and needed more water than a California felt great about for making a few steaks. Sure, I could recycle the water but it just never felt like something I could do every day.

Here is what is so great about Joule: it has a magnet in its bottom instead of using a mounting clip. Even the best mounting hardware doesn't compare to this. If you have any pots that a magnet will stick to, you can sous vide in them. The Joule also runs with much less water than other units I've tried. You do not have to fill the pot up to where the exhaust hole in the unit is. The pump will bring water up. It is really great.

Joule's software is simple to use. The iPhone app I tried was a beta version, and everything was already working perfectly. Simple to access via wireless, incredibly intuitive controls. All any of these devices do is to set a temperature and a timer. The app has recipe suggestions and the like, but I doubt anyone really wants that.

Another refreshing feature is that the the Joule is small enough that it'll fit in any drawer or cupboard in my kitchen. Because it has no readout or on the unit controls beyond on and off, it is really slender.

Thanks to the folks at ChefSteps for making something that really works for small kitchens.