Was Jesus an extraterrestrial? 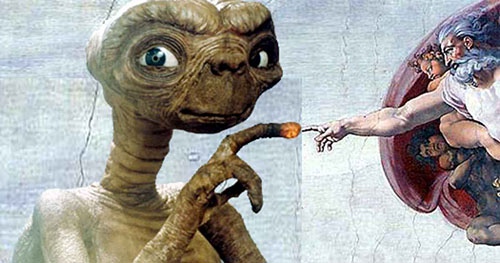 In 1954, a London taxi driver named George King received an extraterrestrial mental telegram informing him that he's been deemed the voice of the Interplanetary Parliament. Motivated by his new cosmic position, he launched the Aetherius Society to spread the spiritual teachings of extraterrestrial gurus like Buddha, Sri Krishna, Confucius, and Jesus. Sure, why not. King died in 1997 but the Aetherius Society lives on. MEL Magazine's Jonathan Parks-Ramage paid them a visit:

“The biggest reason why the Aetherius Society is here, why the Cosmic Masters came to earth, is because the Mother Earth has to change,” Keneipp says. “She’d held herself back for hundreds of thousands of years because she’s providing mankind a home to evolve. She’s been told by the karmic lords that she can no longer hold herself back. And so the big push by the Cosmic Masters is to raise as many people up so that they will be able to get to a point where they will enter a new age here on earth.”


Essentially, the Society’s goal is to lift Mother Earth’s burden with love and prayer, a task helped by descended Cosmic Masters like Jesus and Buddha.


Inspired by his new religion, Keneipp soon abandoned the pre-med program at SIU, deciding instead to moved to Los Angeles in 1978. Keneipp devoted his life to the church, working directly with George King as he expanded his religion. I ask Keneipp what it was like to work for King during those formative years.

His response surprises me. “[King] could be very hard, as you would hear other masters of yoga would be in India. They weren’t politically correct and gooey and friendly. They could be extremely harsh and hard and pull you up. [King] expected you to give the best all the time.”

"Jesus was an alien" (MEL Magazine)