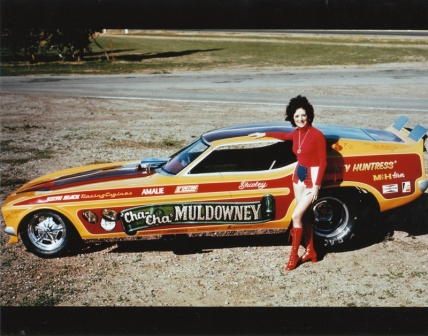 This vintage footage of Shirley Muldowney kicking ass in drag racing is made that much better because it's set to the song "Shirley" by L7 from their album Hungry for Stink.

Downey is one of the truest badasses in motorsports history. From her site:

Her willingness to buck the system would change the sport forever in 1965, as she was successfully licensed that year to compete in the supercharged gasoline dragster category by drag racing’s largest organization the National Hot Rod Association (NHRA). The upper Gas divisions were professional categories, and no other women had ever been permitted this qualification up to that time. She proved it was no passing thing by match racing (exhibitions for a guaranteed fee) throughout the East and Midwest for the next four years, as well as making selected national event appearances on both NHRA and rival AHRA (American Hot Rod Association) sanctioning bodies. However, in 1971, NHRA decided to eliminate the Top Gas category due to the introduction of new divisions, and Shirley chose to move into the popular new “funny car” category. There is nothing funny about funny cars. The car makes several thousand violent horsepower running on nitro methane fuel, and can be very difficult to drive. Undaunted, Muldowney stepped right up to the plate, posting a win on her first time out at a match race in Lebanon Valley, New York.

Bonus video: highlights from Heart Like a Wheel, the Muldowney biopic sampled in the L7 song:

Here's Shirley Muldowney Career Highlights put together by the NHRA

And if you like straight-ahead kickass rock, L7's Hungry for Stink should be in your collection: