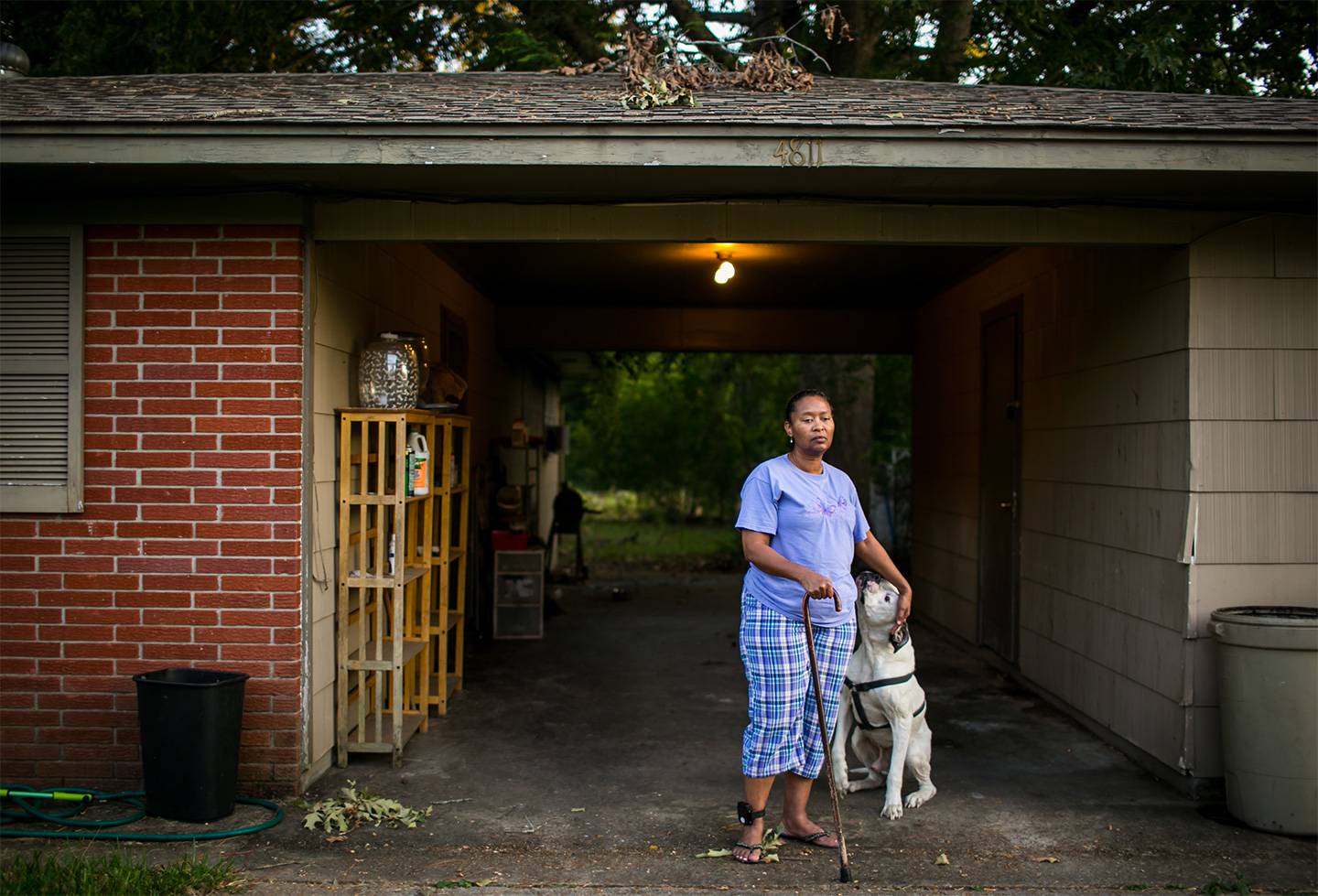 Tennie White outside of her home in Jackson, Mississippi. Currently on house arrest after 32 months in prison, Tennie cannot walk farther than her mailbox. Ms. White helped to uncover contaminated areas from the Kerr McGee site and was later charged with tampering with evidence during court trials against the company for environmental pollution. During her prison sentencing, the judge assured Tennie she would receive medical attention for her cataracts, for which she was already planning to undergo surgery. Being refused the appropriate medical care, she is now legally blind after being released to her home.

Tennie White is a lab owner who became a relentless crusader for environmental justice for black towns and neighborhoods where giant corporations dumped toxic chemicals and walked away scot free; her work resulted in one giant company, Kerr-McGee Chemical Corporation restructuring (under Lehmann Brothers' guidance) into a company that held all its pollution and pension liabilities (which went bankrupt) and a profitable division that held onto the assets built through all that pollution, which was sold off, erasing all responsibility for the executives who'd poisoned their workers and black communities.

White is presently in a halfway house, having served 27 months of a 40 month sentence for allegedly not performing three tests that her lab billed $150 each for. Even if it's true that White didn't perform these tests -- and that's far from certain -- White is the only person to go to jail in connection with any of the awful environmental crimes she exposed. Even the people behind the Deepwater Horizon scandal avoided jail time. White was targeted by the EPA investigators and DoJ attorneys she repeatedly embarrassed for their failure to take action against real environmental criminals, calling them out for apathy, regulatory capture and institutionalized racism (the same crimes, committed by the same companies, in mostly white communities resulted in serious penalties and massive cleanup efforts). But the federal employees who put her in jail for years insist they weren't retaliating against a whistleblower.

Sharon Lerner's deep dive into Tennie White's case is like a black Erin Brockovich tale -- and because the heroine of this story is black, it ends with impunity for the bad guys and jail for the tireless activist who struggled to save unsuspecting and innocent people and their children from depraved corporate criminals, all of whom got fantastically wealthy and walked away without any consequences.

Donald Trump has vowed to defang the EPA, but we can be certain that he's not talking about firing the EPA prosecutors who go after whistleblowers -- his targets will be the "good apples" who actually care about the slow environmental murder of people and towns.

Although the contamination from Kerr-McGee’s plants clearly caused harm — and more than 15,000 people who lived or worked near them have made claims over deaths and illnesses, including cancer, which they believe were caused by exposure to asbestos, creosote and other environmental toxins — none of the executives involved were charged with a crime or served any prison time.

In fact, many of them did better than that, not only avoiding serious consequences for their fraud but actually profiting handsomely from it. Kerr-McGee general counsel Gregory F. Pilcher, for instance, made $9 million off the reorganization, which was clearly designed to avoid the costs of cleaning up the contamination caused by the company. Kerr-McGee senior vice president Robert Wohleber made more than $20 million on the deal. And former Kerr-McGee chairman Luke Corbett walked away with $200 million. In all, Kerr-McGee received $761.8 million in transferred stock in the spinoff process.

All seem to have weathered what turned out to be a brief storm rather well. Corbett is now the lead independent director of OGE Energy. Wohleber went on to become the director of the Summit Midstream energy company, after directing his secretary to destroy all of his documents related to the Tronox spinoff (and having that secretary dutifully carry out his instructions and wipe his computer clean of all emails and files), according to court documents. Chris Watson, the Lehman Brothers executive who helped come up with the whole scheme, went on to become a managing director for Barclays.

Did the EPA Prosecute and Jail a Mississippi Lab Owner Because of Her Activism?
[Sharon Lerner/The Intercept]


(Photo: Nicole Craine for The Intercept)