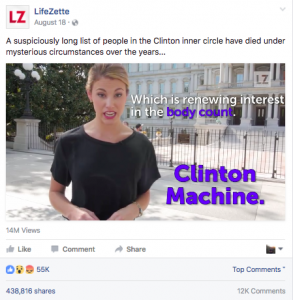 Floyd Brown invented the Reagan-era Willie Horton lie, helped create the Citizens United group, and now owns Liftable Media, including sites like Conservative Tribune (50th most-trafficked site in the USA) and Western Journalism (81st), whence came fake news stories like the lie that Obama had altered the White House logo to include a white flag of surrender (the logo change came from GWB's White House); the lie that Muslims had been "ordered" to vote for Hillary; the lie that Obama had encouraged millennial non-citizen Latin@s to vote without fear of reprisals; the lie that Clinton had a Vegas "drug holiday" before the debate; the lie that Obama's birth certificate was not accepted by experts as genuine -- Brown's sites are all included in Facebook's verified news sources.

Brown is a Trump advisor, also identified by Trump's spokesperson as "a close friend."

Laura Ingraham is another Trump ally who's been tapped to be his presidential secretary: she owns the Ingraham Media Group, including sites like Lifezette, which produced the hoax video "Clinton Body Count," which accused the Clintons of conspiring to crash John F Kennedy, Jr's airplane and of complicity with many other deaths, a video that was shared 14,000,000 times after its successful viral debut on Facebook.

Lifezette also produced a viral hoax video about George Soros buying a voting machine company whose products were widely used in counting US ballots (Soros didn't invest in the company, nor does that company supply US ballots). Other Lifezette hoaxes include a story asserting that a Wikileaks-published document linked Clinton to occult rituals.

Most significant of all, though, is Trump's presidential chief strategist Steve Bannon, whose Breitbart News is a font of hoaxes and slanders:

Breitbart News blends commentary and journalism with inflammatory headlines, in many cases producing fake stories sourced from online hoaxes. The site once attempted to pass off a picture of people in Cleveland celebrating the Cavaliers as a massive Trump rally. The site furiously defended Trump’s false claim that “thousands” of Muslims in New Jersey were “cheering” the 9/11 attacks, a claim that multiple fact-checking organizations have thoroughly debunked.