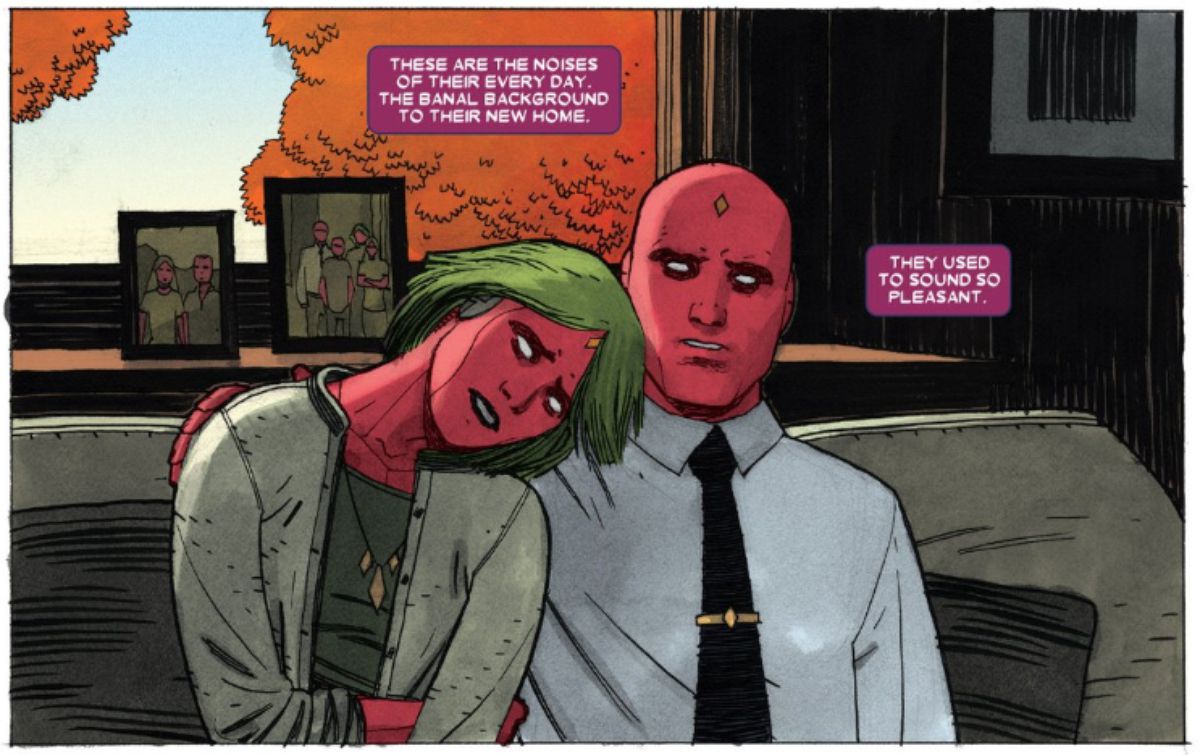 It was the Coates quote that got me to pull the two Vision collections off the rack at Burbank's House of Secrets last weekend, because I've enjoyed Coates's run on Black Panther so much, loved reading the combination of rage and cool analysis that characterizes Coates's nonfiction reinvented as a superhero story.


In a different -- but equally affecting -- way, King's Vision is a story about fundamental justice. Vision -- now an immortal, nearly omnipotent android created by an evil godlike alien, whom he has sworn to destroy -- has saved the world 37 times since then. Though he is still a member of the Avengers, he and his family -- a robot wife, a pair of robot children -- have settled in the DC suburbs, determined to live their lives as normal humans, despite being able to fly, walk through walls, and kill at a blow.


So Vision becomes a story about assimilation, about wanting to be like everyone but not fitting in. But as King's storytelling makes clear from the first page, it's a story about fate and destiny, about the knowledge that it can't possibly work, that there is a world out there of people who will never accept you, regardless of your merits or accomplishments -- and certainly not because they owe their lives to you.


In places, Vision reads as a parable about the lives of demobilized veterans of color, hated by the country they risked everything for. In other places, it's a story about simple prejudice. All throughout, it is a story about love, and fury.


I was never enough of a Marvel comics fan to be able to keep the various pantheons and incarnations clear in my head, but it's clear that King has brought a deep knowledge of the material to this story, and the reviews from trufen are enthusiastic about the dividends lurking in this book for people who truly love the complex backstory of the Avengers.


But I'm here to testify as someone who was virtually totally ignorant of the setting and history: Vision is a moving and gripping story you won't soon forget.