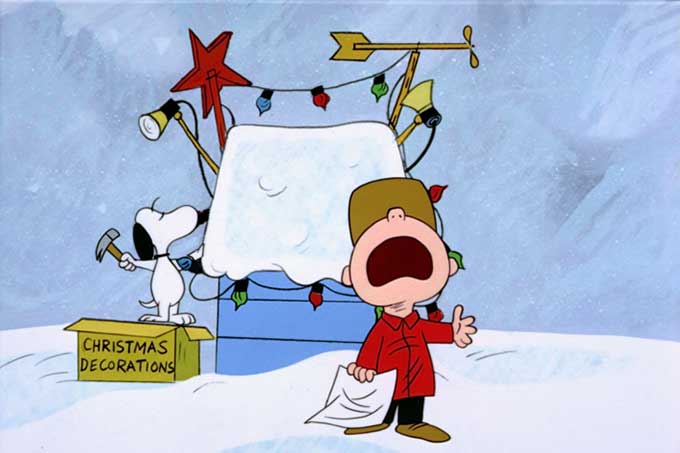 A Charlie Brown Christmas won the 1966 Emmy for Outstanding Children’s Program. Half of US viewers watched it when it aired. But the project was under threat of being killed every step of the way. From Jennings Brown's article in The Vindicated:

Lyrics or not, the CBS executives didn’t think jazz belonged in a cartoon. They also challenged Schulz’s decision to use untrained children instead of professional adult voice actors. They especially couldn’t understand why children would use such big words. (Lucy: “We all know that Christmas is a big commercial racket. It’s run by a big Eastern syndicate, you know.” Charlie Brown: “Don’t think of it as dust. Think of it as maybe the soil of some great past civilization. Maybe the soil of ancient Babylon. It staggers the imagination. Maybe carrying soil that was trod upon by Solomon, or even Nebuchadnezzar.”) This, despite the fact that for about 15 years, “Peanuts” characters had spoken with advanced vocabularies.

Schulz even got pushback from his own team. Mendelson suggested a laugh track would save the show and Schulz responded by standing up and walking out of the room. When Schulz, a Sunday school teacher, said Linus should recite from the Gospel of Luke, Mendelson and Melendez protested. “We looked at each other and said, ‘Well, there goes our careers right down the drain,’” Mendelson recalls. “Nobody had ever animated anything from the Bible before, and we knew it probably wouldn’t work. We were flabbergasted by it.”

Of course, now Mendelson realizes that Linus’s segment probably made the entire project work. “That 10-year-old kid who recited that speech from the Bible was as good as any scene from Hamlet,” he says.

Snoopy has been a NASA mascot for more than 50 years going back to the Apollo missions. Now, Snoopy is headed to the International Space Station for a new cartoon series, Snoopy In Space, launching November 1 on Apple TV+. NASA image below: “Headed for the launch pad, Apollo 10 Commander Tom Stafford pats the […]

This is a photo of the voice actors behind some of the animated characters in the Peanuts gang. Notice that all the kid roles are actually voiced by children. Kristy Sproul of Voice Chasers, a voice-acting forum, writes: The original image had appeared in the February 10-16, 1968 issue of TV Guide to promote the […]