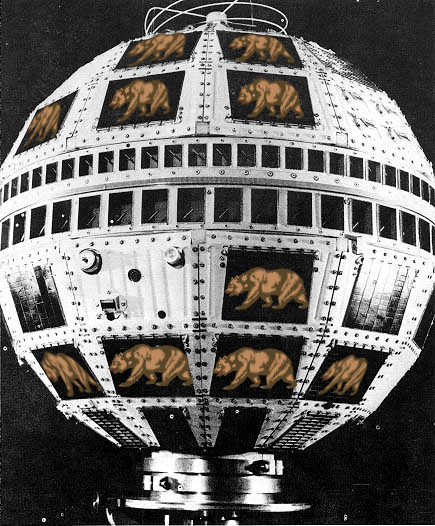 Yesterday, California Governor Jerry Brown told an audience of scientists at the American Geophysical Union that the state would launch its own "damn satellite" and continue climate research if the Trump administration shut down federal research.

Brown once mooted a California communications satellite in the 1970s, earning him the nickname "Governor Moonbeam." His promise to launch a Californian climate-monitoring satellite drew wild applause.

California's legislature has vowed to lead a resistance to trumpism, which is good politics and good economics -- California's large, diverse economy (sixth largest in the world, encompassing clean energy, tech, entertainment, shipping and logistics, etc) gives it the muscle to assert the kinds of policies that are usually the purview of large national governments. Funding a Keynesian program of R&D spending, evidence-based policy, strong environmental regulations, supply-side redistribution and diversity and tolerance will serve California well during the Trump years, making the state a magnet for the bright refugees of the rest of America, and providing the evidentiary basis for blaming Trump for the damage the rest of the country will suffer over the next four years, by showing that the state that repudiated trumpism thrived while the rest of the country foundered.

Brown reiterated that the threat is “far more” than one or two politicians – “we’re facing Big Oil. We’re facing big financial structures that are at odds with the survivability of our world.” He petitioned the assembled scientists, whom he called “truth seekers,” to join with attorneys to help California lead the charge.

Brown cast some in the media, including the conservative outlet Breitbart, as “clowns” for mocking state legislation regulating emissions from dairy cows and landfills as “cow farts.” Too much of the ephemeral coverage that clogs social media in bursts is “meaningless news bits” rather than “real life” and “real science,” Brown said.

He touted the state’s vehicle emissions standards, later adopted by the federal government, to argue for California’s outsized influence in the global economy.

“A lot of people say, ‘What the hell are you doing, Brown? You’re not a country,’ ” the governor said, to laughter.

“Well, judged by measures of gross domestic product of over $2.2 trillion, we’re the fifth or sixth economy in the world. And we’ve got a lot of firepower ... And we will persevere. Have no doubt about that.”

“We will set the stage. We’ll set the example,” Brown added. “And whatever Washington thinks they are doing, California is the future.”