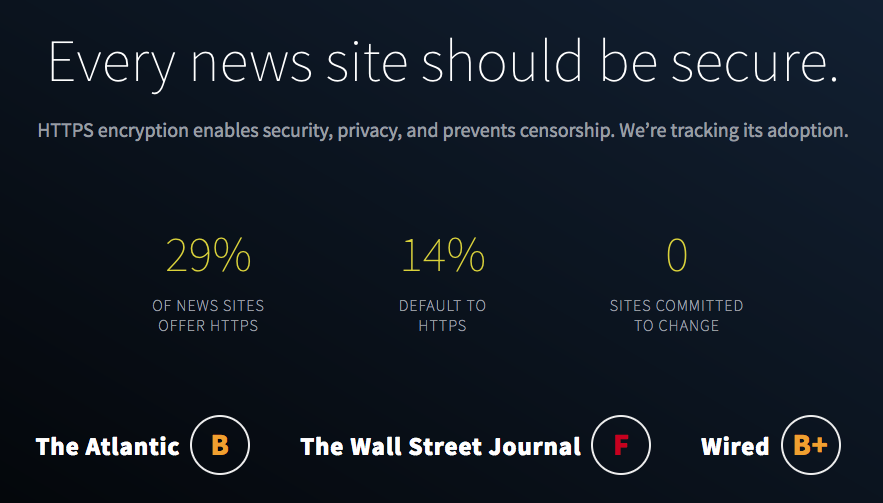 Secure the News periodically checks in with news-sites to see how many of them implement HTTPS -- the secure protocol that stops your ISP and people snooping on it from knowing which pages you're looking at and from tampering with them -- and what proportion of them default to HTTPS.

Boing Boing is in the first category, but not the second (yet).

Secure The News automatically analyzes each news site every 24 hours and grades it on an F to A scale based on several factors: whether the site allows HTTPS connections, whether it enforces HTTPS by default, whether it deploys a security feature known as HSTS ("HTTP Strict Transport Security"), whether HSTS is preloaded, and several other smaller factors. For a more detailed description of these factors and our methodology, see here. On the Secure The News Leaderboard, you can see which news sites have made progress and which ones still have work to do.

If your news organization has a low grade and you are working towards adopting HTTPS by default, we are happy to indicate on Secure The News's Leaderboard if you commit to making the switch in the next six months. All you need to do is post a commitment on your website and alert us by contacting us here.


Introducing Secure The News, an automated tool tracking the adoption of HTTPS encryption across news websites
[Garrett Robinson and Trevor Timm/Freedom of the Press Foundation]