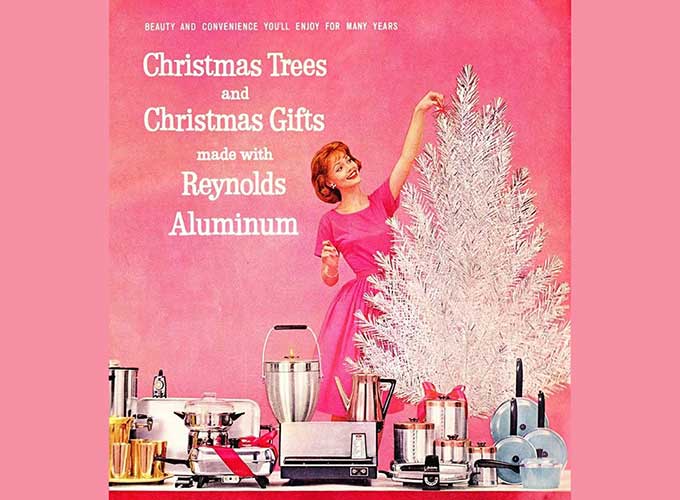 Lisa Hix of Collectors Weekly has just published a great interview with Sarah Archer, whose new book, Midcentury Christmas: Holiday Fads, Fancies, and Fun from 1945 to 1970, explains how companies like Alcoa Aluminum used Christmas to capitalize on the technologies it had developed for World War II.

The company that produced the most aluminum for the war effort was Alcoa, but there were also some smaller companies, too, many of which were based in Manitowoc, Wisconsin, of all places, which was one of the big aluminum capitals of North America. Like a lot of mid-century Christmas items, including the acrylic rubber that coats Christmas lights cords, aluminum trees came from thinking about repurposing a material produced for the military. The aluminum strips that were used to make the trees were originally designed for something called chaff, which was sprinkled over enemy territories to scramble radar because the little pieces of metal would diffuse the signal.

Many 1950s aluminum tree producers used Alcoa branding. The exterior of the box would say, “We proudly use Alcoa aluminum.” You could put ornaments on these trees, but one of the challenges of decorating them was not getting electrocuted, which was mentioned prominently in the how-to pamphlet that came with the tree. Because it was not safe to put electric lights on the metal, the companies distributing the trees would sell a rotating lamp that would shine different-colored lights on the tree to bathe it in magenta or purple.

Filmmakers turned a writing prompt from Reddit user WaFromWa into a stellar short film whose premise includes Santa as a deadly, covert super-assassin. Superb! (via JWZ)

The Alien Chestburster Christmas Ornament is just the thing to finish your nerdmas tree; it's from Pittsburgh's Creature Replicas, who will also sell you a life-size 'burster, a fossil Tremors graboid, or some damned fine Aliens magnets.