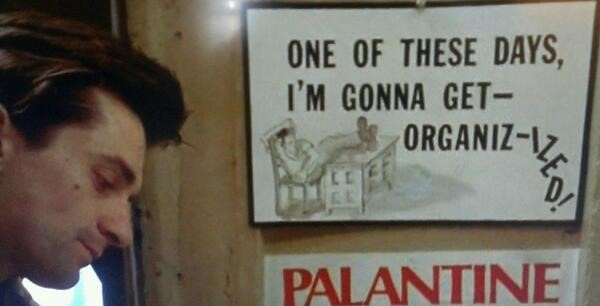 Is 2017 the year you're going to get organiz-ized? The first step is acknowledging the scope of the issue. A bunch of organizations (!) have helpful scales to determine how pronounced you or someone you know is getting with their clutter:

Above is a nine-point scale ranging from Felix Unger to typical teen. Anyone who has seen real hoarders knows that the clutter is never as clean as this staged demo.

• More Than Clutter: How To Understand And Intervene In Hoarding (Vermont Public Radio)

Too soon? By way of Donald Bell’s Maker Update comes this game where you send a shopping cart into a market in search of TP. The simulation was designed by Jelle Vermandere. You can either play the game in a browser or Jelle shows you how he used an Arduino Uno and motion sensing to […]

After a tipoff, police raided a house in Brooklyn and carted off boxes said to contain close to a million N95 masks. CBS News: “Authorities remove close to one million N95 respirator masks, gloves, gowns and other medical supplies after a Brooklyn man was caught allegedly hoarding the equipment.” I’ve seen a few articles saying […]

Panic buying through the ages

This isn’t the first time that we’ve been dicks to one another by grabbing as much of everything, all at once, that we possibly can. This video primer provides an overview of how we’ve fucked one another over for what should be plentiful resources throughout the 20th century.