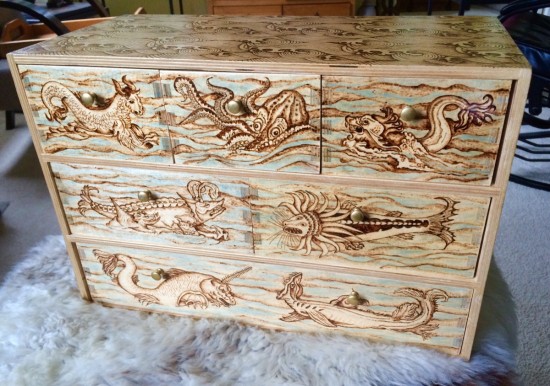 Lorraine Andrusiak couldn't get a new Ikea Moppe dresser in Canada, but she found this one in a thrift store, marred by a thick, ugly coat of paint; so she stripped the paint, transferred vintage sea-monster art with graphite paper, and burned the decorations into the wood -- the result is gorgeous.

I used graphite paper to transfer the monsters, then fired up my trusty wood burner and set to work. I covered the sides and top of the unit with a pattern of waves. Once the wood-burning was finished, I lightly coloured around the monsters with a blue watercolour pencil and applied a moistened cotton swab to give the water a blue tint. I scrounged through old books at the thrift shop until I found one with suitable nautical illustrations, and ‘podged’ the pages inside the drawers to line them. Then all that was needed was a set of little bronze pulls and it was done!