The night I began loving the alien 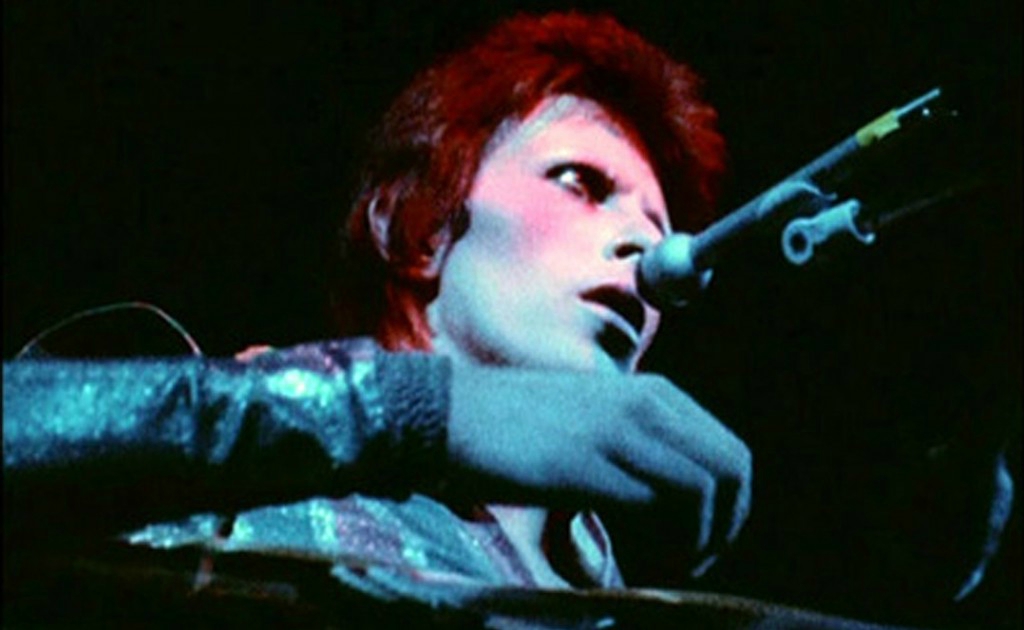 Last year, a few days after David Bowie died, I posted the following reminiscence/remembrance to my Facebook page. On the anniversary of his death, I thought I might share it here.

It was Friday, November 16, 1973. I was 16 years old. Every Friday night, I would rush home from whatever trouble my friends and I were getting into to watch The Midnight Special, hosted by the howling-prone Wolfman Jack. For a sheltered kid growing up in a small Southern Baptist town outside of Richmond, Virginia, The Midnight Special and Don Kirshner's Rock Concert were my principal means of seeing live-performance rock n' roll.

On this night, the show broadcast David Bowie's 1980 Floor Show, a special that had been recorded in October of 1973 at The Marquee Club in London, but not previously aired. Up to that point, I don't know how much Bowie I'd been exposed to, but it wasn't much. I'd certainly heard “Space Oddity” on the radio, and likely a few other tracks, but my exposure was minimal. And I don't think I'd ever laid eyes on the man until this broadcast.

I was so excited as the show began, but that enthusiasm soon turned to confusion, then outright fear. I saw this....creature that I had no frame of reference to understand. I was looking at some strange and incomprehensible being, this OTHER. The expressive freedom and creativity I saw, the gender fluidity, the flaunted sexuality -- it was both seductive and alarming; this pandrogyny felt fundamentally threatening to whatever male heterosexuality I'd been trying so desperately to understand and model. Part of me was attracted, inspired even, part of me was repulsed. Or at least scared.

When “Space Oddity” began, intercut with shots of launching Saturn V's and an orbiting Skylab, by the time they were checking ignition and wishing God's love, I think the top of my head had fully come off. At 16, I was a NASA nerd, so this was something I knew, something I was comfortable with. Hardware! Rockets! Blast-off! Oh, wait, never mind. I floated up from the basement family room, through the roof of our chocolate-brown Colonial split-level, and into that November night sky. Far above the world. Then "Can't Explain" came on. The exuberance with which Bowie struts through that song completely shorted out whatever circuits I had left in my limited understanding of gender or what I could find attractive. I still had no idea who or what I was looking at, but I knew this was something unique, something inspired.

I lived with my inspired, but confused feelings all weekend long, anxious to discuss them with my friends at school on Monday morning. That Monday, in the hallways of Thomas Dale High School, it was the first thing I brought up to the usual huddle of freaks and fuckups by the lockers. "Hey, did you see Bowie on Midnight Special? Wasn't that amazing!?," I asked. They laughed, they grimaced. "That dude is gross, man, a total fag!," said one of them. "Yeah, faggot music," said another. They all shook their heads in agreement and I demurred. Now I was really confused. Does liking this guy make me gay? I was pretty sure I wasn't gay, but I couldn't deny the feelings I had for what I had experienced.

I didn't have much to do with Bowie until two years later when I joined a hippie commune. One of the friends I made there was a young gay man who had been heavily into glam. He turned me on to Hunky Dory, The Man Who Sold the World, Ziggy Stardust, and Diamond Dogs (along with the Velvets and Iggy Pop). He also gave me a little appreciation for what it must have been like being a gay kid growing up in Ohio in the 70s. And how Bowie had felt life-saving to him and his friends. Bowie had gifted them the weirdo to celebrate within themselves. I realized that seeing Bowie that night in 1973 had done something similar for me. I was a different kind of Other, but I was most certainly Other. Here was a guy who was flying his freak flag with such smirking abandon and courageous levels of creative self-expression. If he could be that comfortable being this unapologetically weird, certainly my strangeness, my otherness, was tame by comparison. Lying there on my back, on the couch at the commune, listening to Rick's stack of Bowie vinyl on the living room stereo, I knew that my initial instincts had been right. This alien fellow was on to something. I put the raygun to my head in that moment, pulled the trigger, and have never looked back.

The night before David Bowie died, I was listening to some of the tracks from Blackstar in honor of his birthday. I saw the Hammersmith Odeon performance for “Moonage Daydream” on the right rail of YouTube and decided to open it full-screen on my large monitor and crank it beyond 11. I watch this performance every few years and it never ceases to enchant me all over again and make me want to cultishly follow the Spiders forever. But that Sunday night, the performance hit me especially hard. I cried tears of joy so fully, they frightened me. I exclaimed things into the soundwaves blasting from my speakers. I was filled with such profound feelings of love and appreciation for what this artist, this extraordinary human being, was able to inspire in that awkward 16 year old, on that Friday night in 1973, when he first began loving the alien.

After “Moonage Daydream” finished, I watched “My Death,” another favorite from the Hammersmith show. I thought about my own mortality, allowed myself to be overwhelmed by the beauty of human frailty expressed in that song. I went to bed. At 2:26am, I awoke to a text from a friend: "So devastated. RIP our amazing Bowie."

But whatever lies behind the door

There is nothing much to do

Angel or devil, I don't care

For in front of that door, there is you