What happens when your political photo goes viral in 2017 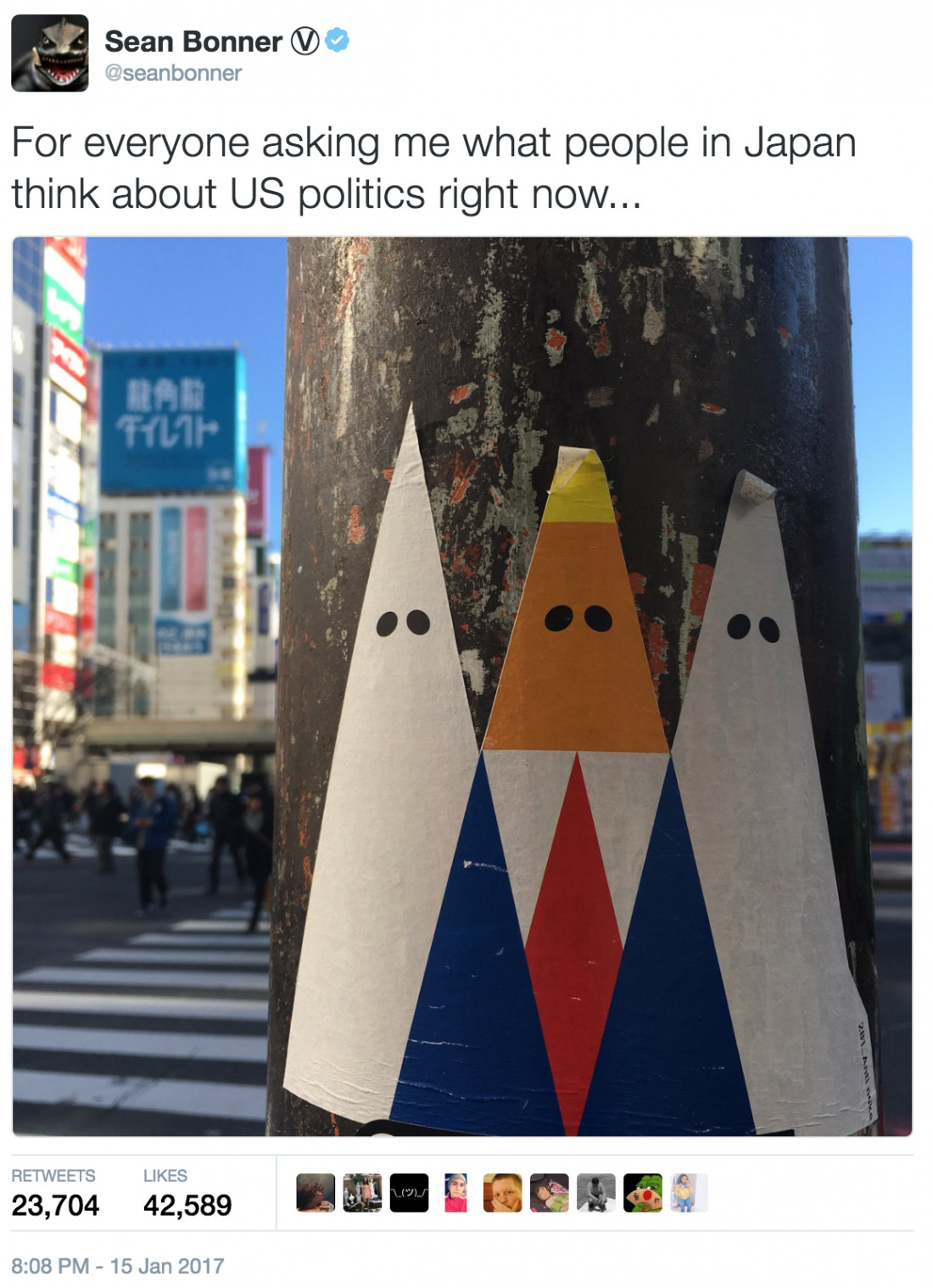 Sean Bonner's posted his share of viral images over the years, but the most recent time was a little different: he tweeted a picture of an anti-Trump political sticker he spotted in Tokyo, created by street artist 281_Anti nuke.

Much of what followed was normal: a lot of trolling, people accusing him of faking the photo (why would you fake the photo?), throwing shade at Japan's (very real) xenophobia problems, etc. But there were some key differences, which Bonner lays out: lots of people used "fake news" to dismiss his picture -- and press outlets tried to buy the rights to the image, despite the fact that it's CC licensed (but wanted him to sign away his life in exchange for the cash).

BTW, Bonner has a very good book of his Tokyo street photography.

A quick scan of replies finds no shortage of statements calling me a faggot, which I found hilarious in it’s retro cliche nature but was surprisingly being used as a genuine insult in these cases. For simply posting this photo and my observation I’m also apparently a liberal, libtard, SJW, fascist, racist, expat, tourist, etc in the eyes of anonymous twitter accounts with single digit follower counts. I find all of this terribly amusing and fascinating, though I can also understand how someone else in my shoes might take these attacks more personally. I’m simply lucky(?) to have 20+ years of experience with trolling so I see such retorts as almost a script that gets followed again and again with only minor details swapped out each time. So maybe these trolls and shitposters are just unknowingly taking my bait. Who’s trolling who??? I’m laughing, so that’s good enough for me.

A not insignificant number of replies also accused me of making and posting the sticker myself just to manufacture the drama, and even in the face of the existence of 281_’s own gallery showing the image, these folks would then jump to the conclusion that I created 281 as well rather than accept their initial reaction was misplaced. New thing time however was quite a few people calling this fake news. But I guess we all know that in 2017 “fake news” is a term applied to anything you don’t agree with, no matter it’s basis in fact.

Another new twist this time is the number of media outlets that have reached out to me. I’d say this is a net positive as most often in the past these places would just take the extra lame “it’s on the internet so anyone can use it” approach, so outlets asking for permission is a welcomed change. I use a CC-BY license for these kinds of things as there’s really no way I can stop people from stealing it and using it for whatever purposes they want so fighting that is a losing battle from the beginning, and I’m quite happy to just have proper attribution. More than one outlet did ask me to agree to their terms which would have given them an eternal, transferable, non-exclusive license to do whatever they wanted with it for ever and I said no and pointed them to the CC-BY license.

TALES FROM THE FRONTLINES OF VIRAL PHOTOGRAPHY
[Sean Bonner]