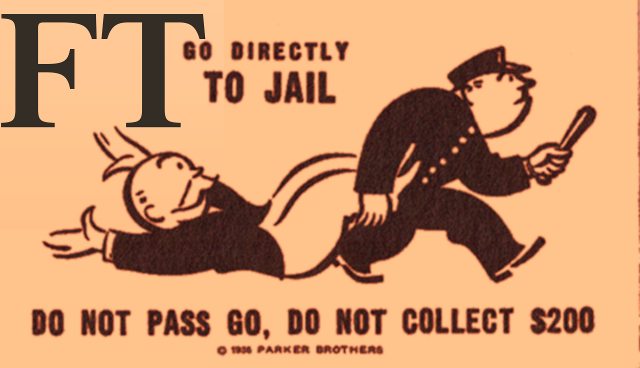 Rolls Royce just arranged for a "deferred prosecution" with UK prosecutors over revelations that it had committed jailable offenses by bribing overseas officials in order to secure their business; under this arrangement, prosecutors have allowed Rolls Royce to pay to have the prosecution halted and to have their executives immunized from criminal repercussions for their actions.

In other words, the UK government offered to drop its bribery prosecution in exchange for a bribe.

Writing in the Financial Times, John Kay condemns this practice -- which has come under increased scrutiny since the 2008 crisis, in which banks were allowed to bribe their way out of criminal prosecutions under an official policy of former Attorney General Eric Holder -- and says that the failure to jail executives is a moral hazard that invites more criminal wrongdoing.

Imagine the reaction if an individual citizen acknowledged that he or she had not only committed criminal offences but paid large sums of money for prosecutors not to initiate proceedings. Yet such behaviour has become the norm for large corporations. JPMorgan, Johnson & Johnson and Siemens have all paid out settlements totalling billions to stop proceedings for alleged wrongdoing. The detail varies, but in all cases, the company concerned promised to implement an internal compliance programme to discourage similar behaviour in future.

Yet the very prevalence of such settlements is an indication that their deterrent effect is small. Senior executives appear not to mind paying out large amounts of shareholders’ money to escape any personal liability for their actions, or the actions of those whom they ostensibly supervise. In the US, settlements have come to resemble extortion from well-heeled corporations — especially by attorneys for individual states — rather than a means of bringing malefactors to justice. Some Siemens executives went to jail, but that case is exceptional. It is notorious that only small-bit players have been convicted for their role in the 2008 financial crisis and the scandals that have plagued the banking industry since.