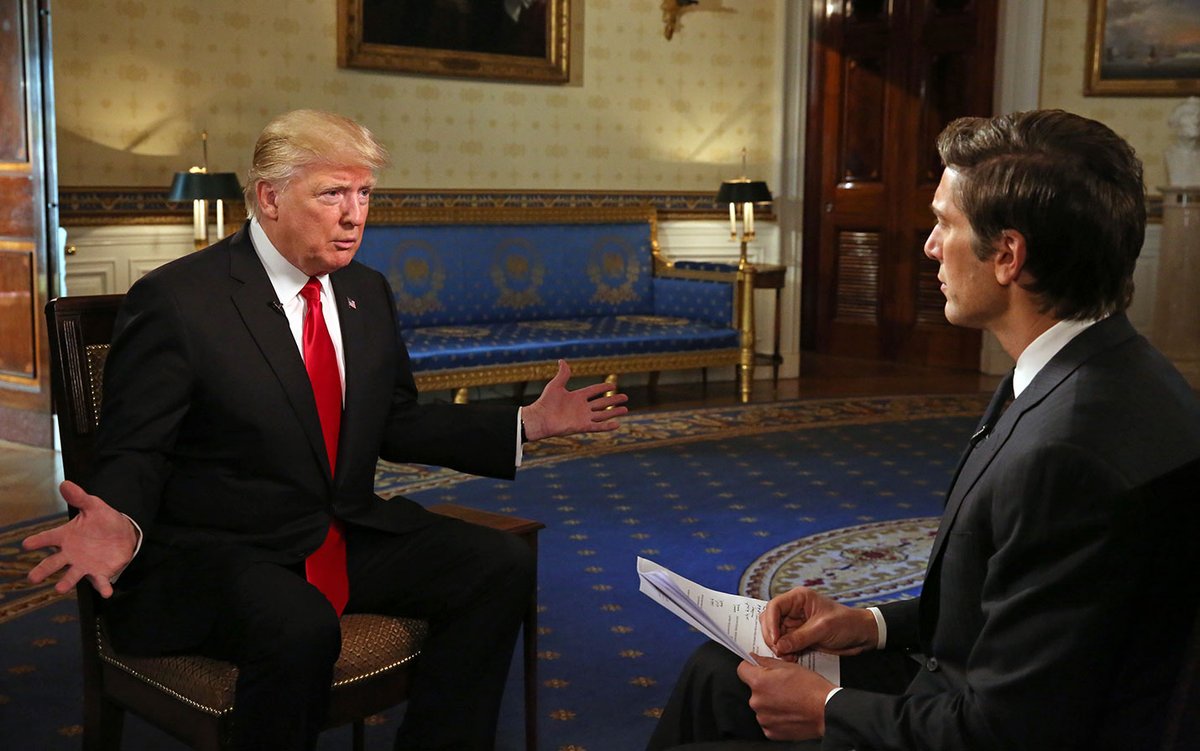 In his first television interview since assuming power last Friday, Donald Trump compares himself to Peyton Manning. Everything else was even weirder. Construction of a wall along the US-Mexico border may begin within a few months.

Pres. Trump on potential reaction to executive action on immigration: "The world is a mess. The world is as angry as it gets." pic.twitter.com/q4UsDuOkEz

In the interview with ABC's David Muir, the narcissist-in-chief couldn't stop obsessively returning to the topic of his perceived grudges over inauguration crowd size, his vote count in the election, even his appearance at CIA last week, roundly criticized by those at the agency. Trump didn't get the memo.

President of the United States: People who think plunder is illegal are "fools." https://t.co/FI4LJQhtPz

In the rambling and deeply unsettling interview, the obviously deranged Trump says torture is a viable interrogation option in his war against ISIS.

Trump also said his presidential campaign was “one of the greatest victories ever;” he defended his bizarre CIA speech as “a home run;” and he criticized “unflattering” and “demeaning” portrayals of his inauguration crowd size by the very bad and unfair media. Sad!

President Trump on his remarks at the CIA, via the @ABC transcript pic.twitter.com/u4qt0XNYJq

Here's what Trump says about the bungled CIA meet-and-greet:

That speech was a home run. That speech, if you look at Fox, OK, I’ll mention you — we see what Fox said. They said it was one of the great speeches. They showed the people applauding and screaming and — and they were all CIA. There was — somebody was asking Sean — “Well, were they Trump people that were put–” we don’t have Trump people. They were CIA people … People loved it. They loved it. They gave me a standing ovation for a long period of time. They never even sat down, most of them, during the speech. There was love in the room. You and other networks covered it very inaccurately. I hate to say this to you and you probably won’t put it on but turn on Fox and see how it was covered. And see how people respond to that speech.

Muir challenges Trump in the interview on his claims that lots of brown people voted illegally against him in the election that led to his presidency:

DAVID MUIR (HOST): When you say in your opinion, millions of illegal votes, that is something that is extremely fundamental to our functioning democracy, a fair and free election.

TRUMP: Sure, sure, sure.

MUIR: You say you're going to launch an investigation into this.

MUIR: What you have presented so far has been debunked. It's been called false.

TRUMP: No it hasn't, take a look at the Pew reports.

MUIR: I called the author of the Pew report last night, and he told me that they found no evidence of voter fraud.

TRUMP: Really? Then why did he write the report?

MUIR: He said no evidence of voter fraud.

TRUMP: Excuse me, then why did he write the report? According to Pew report -- He is groveling again. You know, I always talk about the reporters that grovel when they write something that you want to hear but not necessarily millions of people want to hear, or have to hear.

MUIR: So, you've launched an investigation?

Pres. Trump on receiving nuclear codes: "It is a very sobering moment, yes. It's very, very, very scary in a sense." https://t.co/89o6NhpsWh pic.twitter.com/MNIpCfmec8

Trump keeps repeating his weird lie that 3 to 5 million votes were cast illegally against him. He slammed ABC's coverage, praises Fox, and tells Muir,

Let me just tell you, you know what’s important, millions of people agree with me when I say that if you would’ve looked on one of the other networks and all of the people that were calling in they’re saying, ‘We agree with Mr. Trump. We agree.’ They’re very smart people.

On the possibility of deporting DREAMers, kids born in the U.S. to undocumented immigrant parents:

Pres. Trump says he wants Chicago to fix violence problem: "Afghanistan is not like what’s happening in Chicago." https://t.co/44NFiXe2ao pic.twitter.com/C1IdeWQTDp

It is carnage. It’s horrible carnage. This is Afghanistan — is not like what’s happening in Chicago. People are being shot left and right. Thousands of people over a period — over a short period of time.

Disregarding the advice of his own advisors, on torture:

Trump did admit both his defense secretary and CIA director have told him torture is not worth it: “I will say this, I will rely on Pompeo and Mattis and my group. And if they don’t wanna do, that’s fine.”

Pres. Trump "won’t allow" anyone to demean people in Inauguration crowd: "We had the biggest audience in the history of inaugural speeches." pic.twitter.com/13dHFLbqn1

On a Muslim ban:

Will the ban anger Muslims around the world? “The world is as angry as it gets. What? You think this is gonna cause a little more anger?”

Trump was asked about health care in the interview. Will Americans who have health insurance now all still have insurance after the Affordable Care Act is repealed?

Muir presses him again to state clearly that no one who has ACA health insurance will lose it:

“We want no one. We want the answer to be no one. But I will say millions of people will be happy.”

President Trump to launch investigation into alleged voter fraud: "I want the voting process to be legitimate." https://t.co/zjjJ6vMqXU pic.twitter.com/gDK765766l

Quite a Trump paragraph. pic.twitter.com/lp229UPabk

While getting important stuff wrong about voter fraud, @realDonaldTrump also gets his own statements and travel history wrong pic.twitter.com/RHXeZ4Ny7o