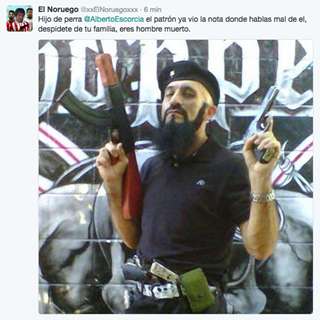 Amnesty International has published a damning report on the organized networks of Mexican Twitter trolls and botmasters for hire who orchestrate massive harassment campaigns against investigative journalists, including death threats and misinformation/slander; they also hawk products and fake out Twitter's trending topic algorithm, operating with relative impunity -- thanks, in part, to Twitter's underinvestment in Spanish-speaking anti-harassment staff.

The Mexican Twitter trolls work closely with the narcotics cartels and their government allies, suppressing news of corruption and atrocities and discrediting reporters who investigate massacres and coverups.

If Amnesty can identify the troll networks, then it is clear that Twitter can too. And Twitter have access to a lot more data to identify the patterns in their activity. The company can and should be doing more. It’s not just a question of investing more resources; the company also needs to localize its strategies. As a US-based company, with a large share of its income and users in English speaking markets, the Spanish-speaking platform is being neglected. The result is a troll takeover.

If Twitter doesn’t act, the work of documenting and reporting on the trolls will be left to individuals like Alberto. And that work is putting him at risk.

Twitter removed two rule-breaking Trump tweets last night. One touted the conspiracy theory that hydroxychloroquine “cures” Covid19 and that Dr. Anthony Fauci suppressed it, whereas the other promoted a story that falsely claimed that a protestor shot dead at a BLM rally had fired the first shots. Beyond the automated notifications at the top of […]