Canadians: tell your MP to change the law so Canada can welcome Trump-stranded refugees 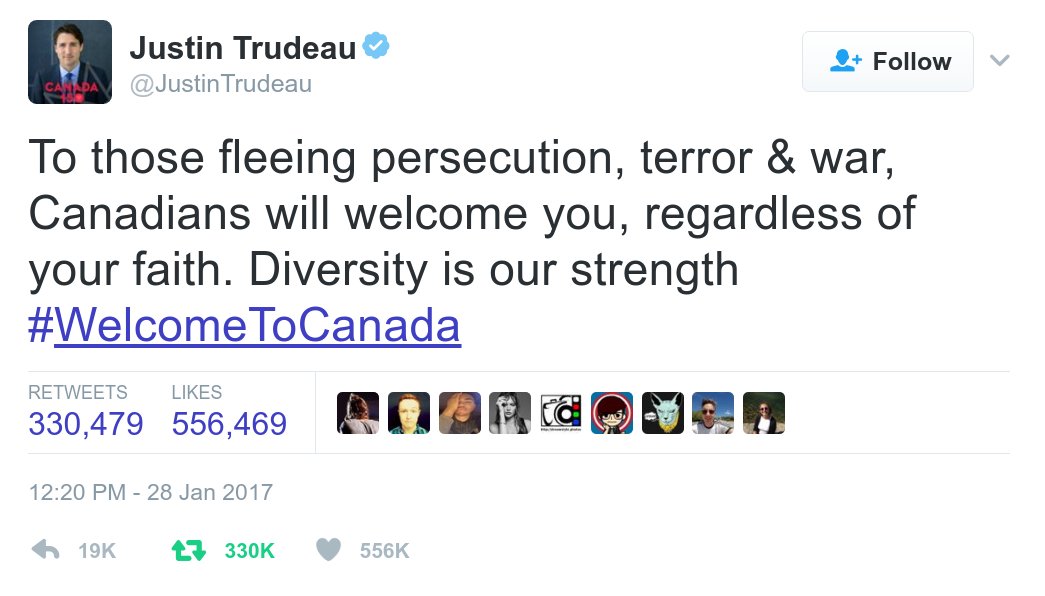 Under the 2004 Canada-US Safe Third Country Agreement, refugees that are turned away from the US are not allowed to seek entry into Canada.

While Prime Minister Justin Trudeau has tweeted that Canada "will welcome you, regardless of your faith," the existing law makes that promise hollow.

A petition to the Prime Minister asks him to rescind the agreement so that these desperate people can take him up on his offer. You can -- and should -- also call you MP's constituency office (here's how) and the office of the Minister of Immigration, Refugees and Citizenship, the Honourable Ahmed D. Hussen, at (613) 954-1064. Write Prime Minister Justin Trudeau at 80 Wellington Street, Ottawa, ON K1A 0A2 (Minister Hussen, a Somali-Canadian dual national, is presently barred from entering the USA under Trump's Muslim ban).

The Canada-U.S. Safe Third Country Agreement came into effect in 2004, and it states that “refugee claimants are required to request refugee protection in the first safe country they arrive in”. The United States is considered a “safe country” under this law. As of today, refugees from across the Middle East and North Africa who have spent months or years seeking status in the United States are at risk of arriving there only to be turned back to their country of origin. Because of the Safe Third Country Agreement, they cannot then seek refugee status in Canada.

Call your Member of Parliament’s constituency office. Call the office of the Minister of Immigration, Refugees and Citizenship, the Honourable Ahmed D. Hussen1, at (613) 954-1064. Write Prime Minister Justin Trudeau at 80 Wellington Street, Ottawa, ON K1A 0A2. Sign this petition. Tell your friends.