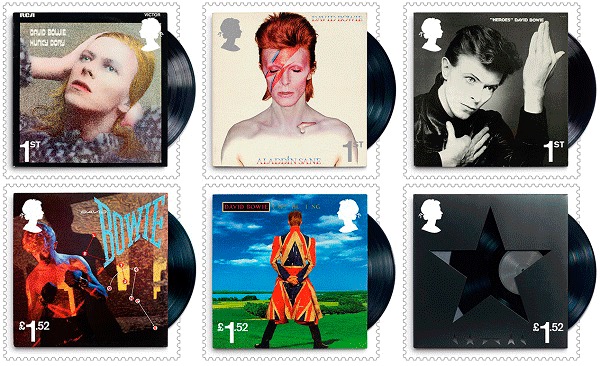 The Royal Mail's David Bowie Special Stamps are now available for pre-order. The 10 stamps -- six featuring his iconic album covers and four with concert images -- will be available on March 14. A stamp with cover art from "The Rise and Fall of Ziggy Stardust and the Spiders From Mars" was previously issued in 2010. The only other groups that Royal Mail has honored with a dedicated stamp issue like this are The Beatles and Pink Floyd.

Legendary guitarist, producer, and composer Nile Rodgers—co-founder of Chic—tells the story of transforming David Bowie’s “Let’s Dance” from its original “folky” vibe into the post-funk masterpiece we know and love. And for more, dig the below demo of “Let’s Dance” that Rodgers shared in 2018 on what would have been Bowie’s 71st birthday: (via Kottke)

I had seen Bowie and Cher’s disco goofball Young Americans medley from her show, circa 1975 (where David still manages to rise about the cheese), but I can’t believe that, until last night, I’d never encountered this rather singular performance of him singing “Fame” on the show. As the video description points out, this performance […]