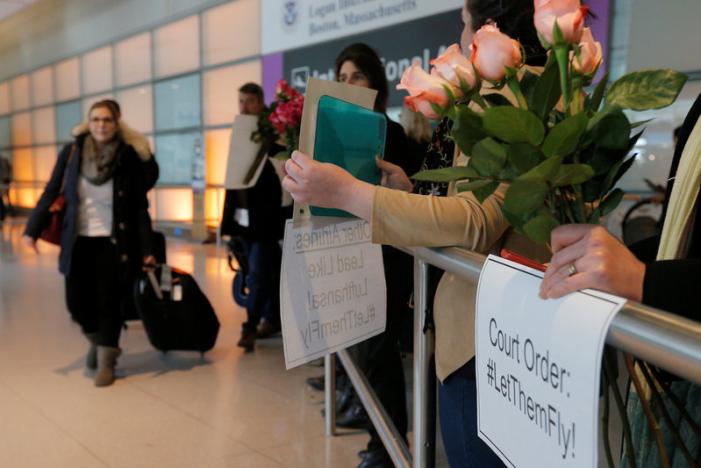 A U.S. judge today temporarily blocked an executive order by President Donald Trump aimed at travelers from seven mostly Muslim countries after the states of Washington Minnesota advocated for an end to the racist “Muslim Ban.”

"No one is above the law -- not even the President," said Washington Attorney General Bob Ferguson.

No comments from the Trump administration.

U.S. District Judge James Robart in Seattle ruled against government lawyers’ claims that the states did not have the standing to challenge Trump’s order and said they showed their case was likely to succeed.

“The state has met its burden in demonstrating immediate and irreparable injury,” Robart said.

The two states won a temporary restraining order while the court considers the lawsuit, which says key sections of Trump’s order are illegal and unconstitutional. Court challenges have been filed nationwide from states and advocacy groups, with some other hearings also held Friday.

“Washington has a profound interest in protecting its residents from the harms caused by the irrational discrimination embodied in the order,” Ferguson said in a brief.

"We only challenged the parts that are actually affecting people immediately, which are the parts about refugees and the parts about targeting these seven countries ... the parts that have getting so much attention and have been causing such immediate harm to people, stranding them oversees and such, are enjoined right away," Washington Solicitor General Noah Purcell told reporters.

“The executive order effectively mandates that the states engage in discrimination based on national origin and/or religion, thereby rescinding the states’ historic protection of civil rights and religious freedom,” reads the complaint in this case.

The American Civil Liberties Union and other human rights groups continue to fight this and other unconstitutional executive orders by the President whose public approval rating is at an unprecedented historical low.

Chuck Schumer on the halting of Trump's travel ban: "This ruling is a victory for the Constitution." pic.twitter.com/w5C3e0j7kp

PHOTO: Demonstrators pray as they participate in a protest by the Yemeni community against U.S. President Donald Trump's travel ban in the Brooklyn borough of New York, U.S., February 2, 2017. REUTERS/Lucas Jackson