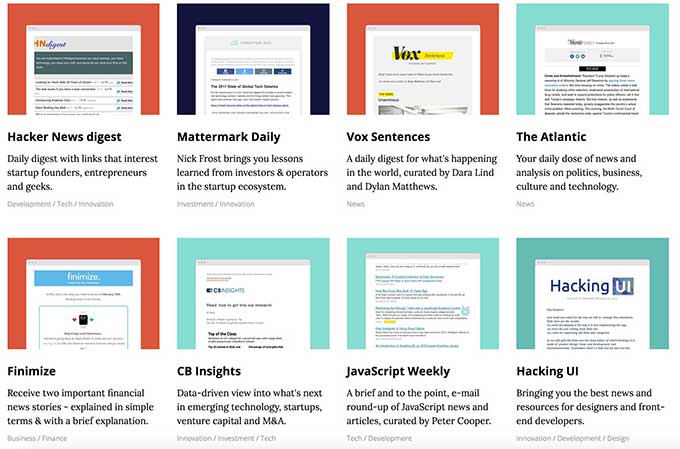 I've been enjoying newsletters more than ever. This old-school form of communication has made a comeback, probably in response to the way Facebook controls the content you see. With a newsletter, there's no middleman filtering out the content.

A relatively new newsletter publishing service called Revue has launched a directory of its favorite newsletters. The newsletters they have selected are not necessarily published using Revue, which is a good move on their part. I'm happy they have included my own newsletter, Recomendo (a weekly newsletter that gives you 6 brief personal recommendations of cool stuff).

Here are some newsletters I really like: Quartz Daily Brief, 5-bullet Friday, The Intercept, WTF Just Happened Today?, Tofugu Thursday, and The Journal.

What newsletters do you subscribe to that you are excited to see appear in your email inbox?

Matt Levine’s consistently excellent newsletter for Bloomberg is called Money Stuff, and is typically focused on white collar crime and crime-adjacent behavior. Monday’s edition looks at the New York Times’ article on on the possible existence of Epstein-related incriminating videos, and attempts to explain why the story doesn’t actually allege criminal behavior by the lawyers […]

The excellent first edition of Matthew Braga’s new Secret World newsletter looks at exactly who you’re calling when you use a satellite phone or Garmin emergency beacon to call for help: It turns out that, anytime someone calls 911 on a satellite phone, or presses the SOS button on a dedicated GPS tracker — anywhere […]

I highly recommend McKinley Valentine’s email newsletter, The Whippet. In each issue she presents interesting ideas, art, videos, and articles. Here’s an item from the latest issue (#85): How to survive solitary confinement I like to read things like this, keep it in my pocket, so I worry less about what if it happens. The […]