Frostgrave, the popular fantasy skirmish game, gets a devilishly-good supplement 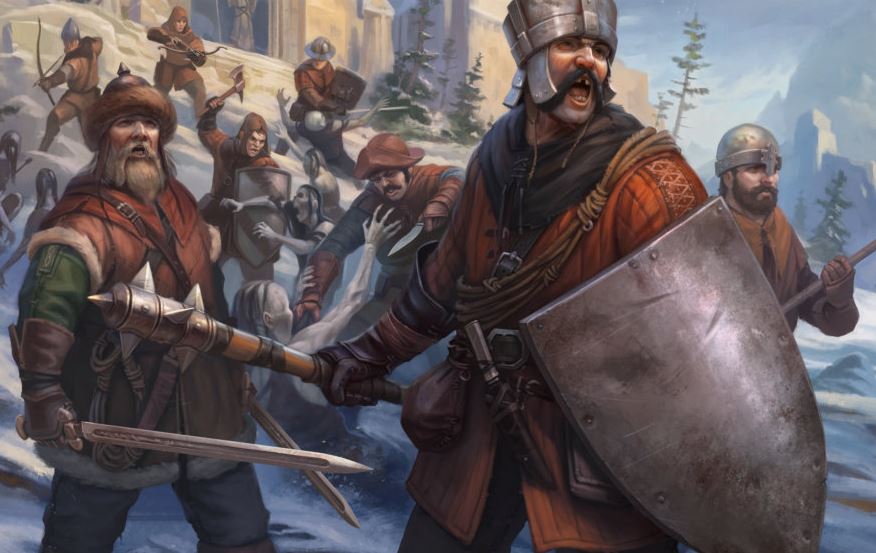 Last year, I had the pleasure of exploring “the Frozen City” of Felstad, aka Frostgrave, the ridiculously fun, retro-reminiscent fantasy miniatures game from Osprey. Designer Joseph McCullogh and Osprey have followed up the highly-successful Frostgrave book with a series of excellent supplements. The latest of these is Forgotten Pacts.

Frostgrave is a very psycho-geographical game, where the ancient, ruined, and magic-saturated city of Felstad is really a central character in the game. One of the things each follow-up book does is shine a light into some new corner of that dark and ruined world. And with that light is also illuminated new stories of the city’s past, new wizard and warband types, new magic, treasures to unearth, and new monstrous adversaries.

Forgotten Pacts accomplishes two goals in advancing the game and the setting of Frostgrave. It introduces a new region, the northern reaches of Felstad, and the barbarian tribesmen who have come down from the hills to plunder and explore there. The book also introduces a new magical discipline for courageous wizards to attempt: demonic summoning using pacts. Demon summoning was de rigor in this region of the city during its heyday and the barbarians have re-rediscovered the lost art of it among the temple ruins and incorporated the practice into their way of life. Venturing into this region, players’ wizards get the opportunity to find a demon’s True Name (basically an unpronounceable name rendered as a sigil) among the ruins, and with that name, attempt to conjure and forge a pact with a demon. These demons can grant all sorts of fabulous advantages to wizards who successfully bind them, but these wishes come at a cost. Players must choose sacrifices to be made to the demon that hold as long as the pact remains between wizard and these “extra-planar entities.”

Forgotten Pacts is produced in the same style as the Frostgrave rulebook and features more stunning full-page fantasy art by Frostgrave court artist, Dmitry Burmak. The book includes background on the northern region, the barbarian tribes, their magical practices (including a type of dtattooing, called Mystic Branding, which grants the wearer certain favors), summoning spells, sacrifices and “boons,” demonic attribute tables (for creating more diverse and colorful monsters), and advanced summoning rules for between-game demon dealing. There are also new soldier types, new treasures, and new beasties (including those pesky barbarians). A series of scenarios, some linked, allow you to explore the northern reaches, search for demonic sigils, and battle barbarian bad guys along the way.

As with the main book and previous supplements, Osprey has teamed up with North Star Military Miniatures to create a companion line of plastic and metal miniatures for the new book and region. The boxed set of multi-part barbarian minis is compatible with all of the previous boxed sets, giving Frostgrave modelers a staggering amount of variety in how they can customize their wizard’s warbands and the city’s dark adversaries.