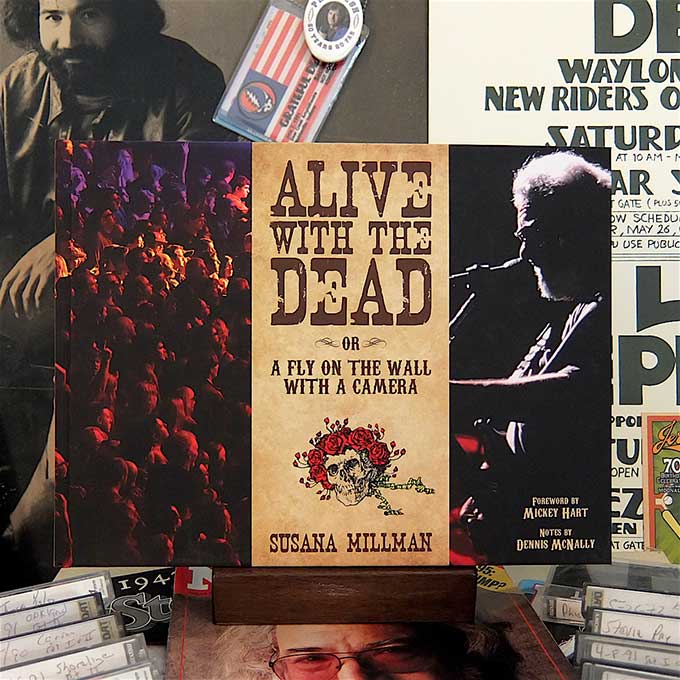 I came to the Grateful Dead late by some standards, and left its orbit early by most. My first album was the band’s third, “Aoxomoxoa,” which I purchased shortly after its release in 1969, and I didn’t experience the Dead live until 1970. From then until 1973, I saw them a lot, mostly at Winterland in San Francisco, but by 1974, with a few memorable exceptions, I was pretty much done.

My blind spot then, is the bulk of the band’s 30-year career, which also happens to be the years when the Grateful Dead was at its most famous and popular, becoming one of the highest-grossing arena and stadium acts of its day. That’s probably why Alive With the Dead: A Fly on the Wall With a Camera, by photographer Susana Millman, seems like such a revelation to a fallen Dead Head like me. Oh sure, Millman gives us plenty of shots of the hoopla surrounding the 1987 release of “In the Dark,” which went double platinum, but her photographs also offer intimate peeks inside a scene I’d always dismissed as being too big for its own good.

And in many ways, it certainly was, as Millman’s photos of the tie-dye-clad crowds filling enormous venues like Soldier Field in Chicago might have argued in the hands of a different author and photographer. Soldier Field, of course, is where the Dead performed its last show on July 9, 1995 — lead guitarist Jerry Garcia would die one month later. But instead of using the pages of her book to caution readers against simultaneous addictions to heroin, cigarettes, and Ben & Jerry’s, Millman gives us a glorious double-printed, double-exposed photograph of the band on stage at its last gig, dwarfed by the adoration of its fans, stage lights, and fireworks.

Elsewhere, Millman shares a sweet recollection of Garcia on her wedding day, during which he confesses his nervousness at having to walk Millman down the aisle to give her away to Dennis McNally, the band’s publicist and biographer at the time. This and other human anecdotes — some fleshed out with text, some left alone as photos — give Alive With the Dead the feeling of a well-thumbed family album rather than a precious tome about rock stars. It’s good to know that from Millman’s fly-on-the-wall perspective, the members of a band I once loved didn’t let the fame I missed go entirely to their heads.

Alive With the Dead: A Fly on the Wall With a Camera

Robert Hunter, who penned the lyrics to the majority of the Grateful Dead’s songs, died last night at age 78. Hunter first met Jerry Garcia in 1961 and went on to write the words to such classics as Ripple, Dark Star, To Lay Me Down, Fire on the Mountain, Truckin’, Touch of Grey, and nearly […]

The title track from the Grateful Dead’s November 15, 1978 release Shakedown Street is one my favorites.

Stunning! The National’s cover of “Morning Dew,” a song penned in 1961 by Bonnie Dobson and later popularized by the Dead, is one of 59 (!) tracks on the Day of the Dead box set they helped produce, featuring Sharon Van Etten, the Flaming Lips, Real Estate, War on Drugs, Jenny Lewis, and many more […]