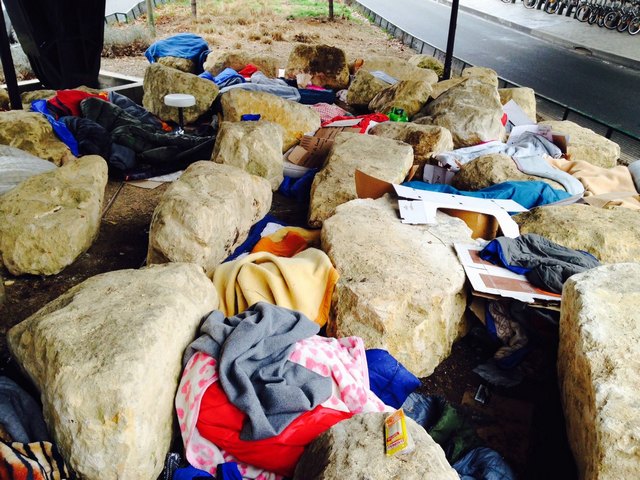 The city of Paris has installed "anti-refugee boulders" beneath a highway overpass in Porte de La Chapelle in a bid to stop Syrian refugees from sleeping in the flyover's shelter while they wait for space to open up at a nearby humanitarian relief center operated by Emmaus solidarité.

Migrants, lacking other options, continue to contort themselves into the spaces between the rocks when they need to sleep.

"It's difficult to sleep here," one migrant told Le Parisien newspaper after the boulders were brought in.

This isn't the only piece of so-called "hostile architecture" Paris authorities have installed to stop migrants from making camps in the city.

After the camps at Stalingrad Metro was cleared, metal grills were erected blocking off areas where refugees had set up camps, such as along Avenue de Flandre and the Place de la Bataille-de-Stalingrad.

In Paris on Saturday, police fired water cannons and tear gas on protesters who gathered to mark one year since the anti-government "yellow vest" demonstrations of 2018.