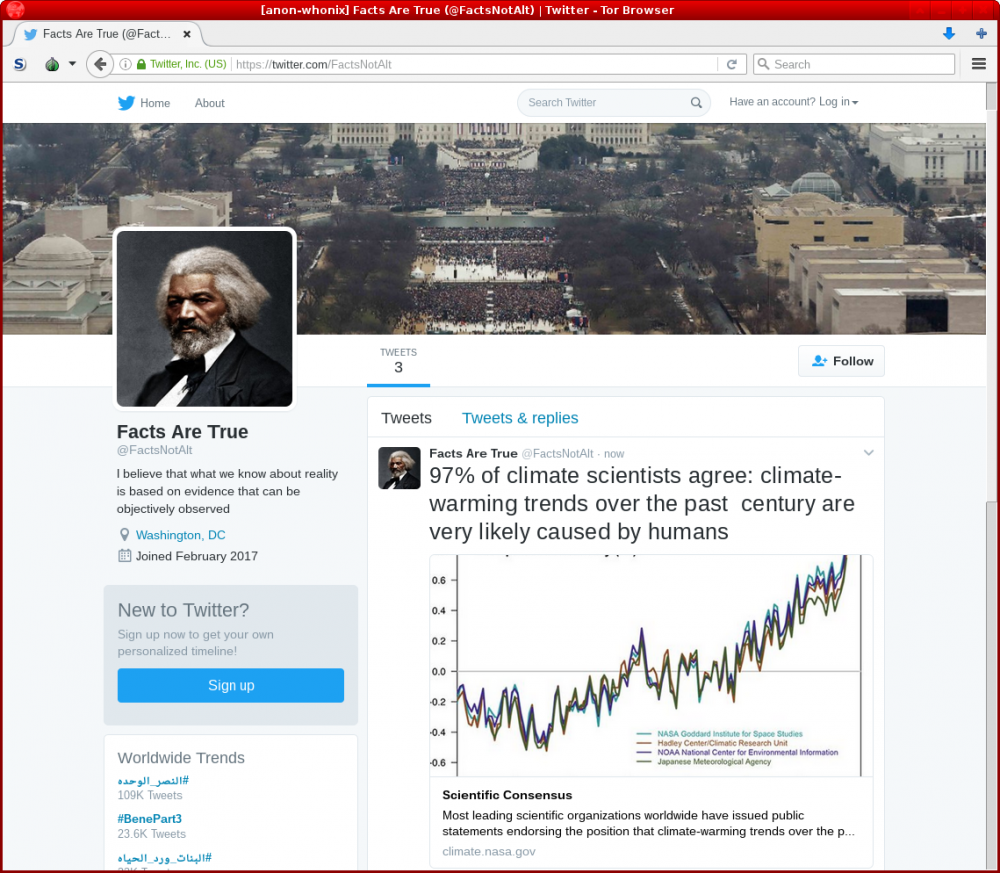 It's one thing to set up an "anonymous" Twitter Hulk account whose anonymity your friends and colleagues can't pierce, because the combination of your care not to tweet identifying details, the stilted Hulk syntax, and your friends' inability to surveil the global internet and compel phone companies to give up their caller records suffice for that purpose.

But as government whistleblowers set up "rogue" agency accounts that send out information that the Trump administration has told them to keep confidential, the scope of the tasks necessary to maintain anonymity in the event that a state-level actor wants to unmask them widens significantly.

Just to get started, you must have both an untraceable email account and phone number. The Intercept's Micah Lee steps through the process to acquire both. You can get an email address from the likes of Sigaint or Riseup and only access them via Tor browser, ideally after booting up into a secure OS like Qubes, Tails or Whonix (note that merely searching for information on running these OSes and browser can flag you as a suspicious individual, meaning all your communication will be intercepted and retained indefinitely).

But it's a lot harder to get an anonymous phone number. You need to buy a burner phone and SIM for cash, wait two weeks for the CCTV system in the store to overwrite the video of the transaction, then activate your phone far from home. Once you've used it to get a Twitter account-creation authentication SMS (again, nowhere near your home or office, and nowhere where there's a record of you having traveled to), you need to destroy both the phone and the SIM.

That's just to set up the account! Once you've got an account up and running, you need to prevent yourself from being identified by the quirks of your writing-style, by being phished through links, by tweeting information that only you know (possibly information that was selectively provided to you in order to test whether you are the leak in the system), by logging in without Tor browser, by uploading photos or other metadata-rich media, etc.


Anonymity is hard, and when your adversary is a large, powerful government, it's even harder.

If you’re following along, you’ve now created a completely anonymous Twitter account as well. Congratulations! But your work has only just started. Now comes the hard part: Maintaining this account for months, or years, without making any mistakes that compromise your identity. I won’t be following these tips myself with the @FactsNotAlt account – I’ve already outed myself as the owner. But for anyone who is trying to anonymously maintain a popular Twitter account, here are some things to keep in mind.

Be careful about how you interact with people:

* You should operate on a strict “need-to-know” basis. Don’t tell anyone who doesn’t need to know that you’re involved with running this account. Don’t brag. This is, by far, the easiest way to mess up and for your real identity to come out: gossip.

* Be careful about what privileged information you tweet. If you’re part of a small group of people who have access to some information and you tweet about it, you might become a suspect when before you weren’t.

* If your account becomes popular, you might begin having conversations with lots of strangers on the internet. Be very careful what you say, even if you’re saying it in a private message. Some of these strangers might be gaining your trust in hopes that you’ll slip and tell them scraps of information about your identity.

* Be very careful about clicking links that people send you – they could be trying to learn your IP address, or even trying to hack Tor Browser. Avoid clicking them at all, but if you really want to click one, first make sure you’re running the very latest version of Tor Browser and set your security slider to High.

* Be conscious of your word choice. People might analyze your writing style to de-anonymize you, so you should try to write in a voice that’s distinctive from your own, if you can. For example, it wouldn’t be wise for Donald Trump to tweet, “The failing @theintercept keeps writing FAKE NEWS. Sad!” from his anonymous account, because people might suspect that he’s the person behind that account.