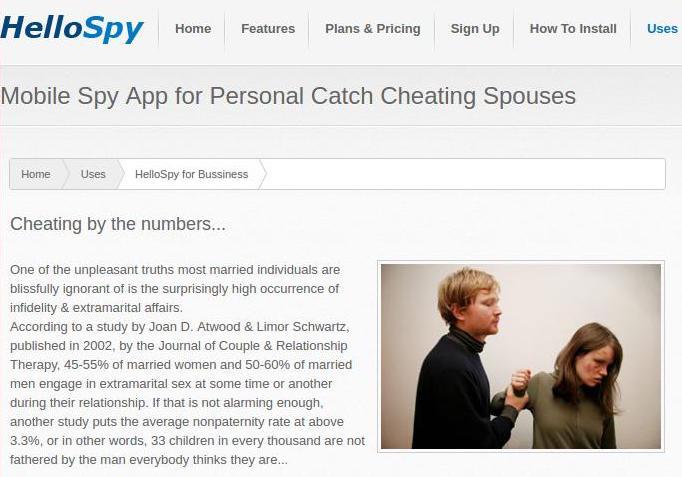 For $170, Motherboard's Joseph Cox bought SpyPhone Android Rec Pro, an Android app that you have to sideload on your target's phone (the software's manufacturer sells passcode-defeating apps that help you do this); once it's loaded, you activate it with an SMS and then you can covertly operate the phone's mic, steal its photos, and track its location.

The marketing materials for Spyphone and its competitors often use imagery of angry men beating up or abusing their (presumably) cheating female partners, and slightly modified versions of these apps are also marketed to governments and police forces. There is a decades-long history of abusive spouses stalking their exes with malware, and in some cases, this has resulted in further violence (include murder) being perpetrated against the women involved.

In 2005, federal authorities announced a 35-count indictment against Carlos Enrique Perez Melara, the alleged creator of an $89 piece of software called "Loverspy." The malware was distributed through innocent looking images, which, when clicked, installed the software onto the target machine. A thousand people worldwide bought the program and used it to extract information from more than 2,000 computers, according to the FBI at the time. Two men and two women were also indicted from their alleged use of the tool. Perez Melara, however, has eluded authorities for years. The FBI added him to the agency's most wanted list in 2013.

Prosecutors had a bit more success against Hammad Akbar, the CEO of a spyware product called StealthGenie. He pleaded guilty to sale of an interception device and advertisement of a known interception in 2014, and paid a $500,000 fine.

According to forensics investigator Demirkaya, following this case some US spyware companies dropped the ability to intercept calls from their products. But the prosecution appears to have done little overall to the easily accessible spyware market. On a YouTube video advertising a piece of malware similar to the one I tested, one commenter wrote recently, "I want to track my wife."