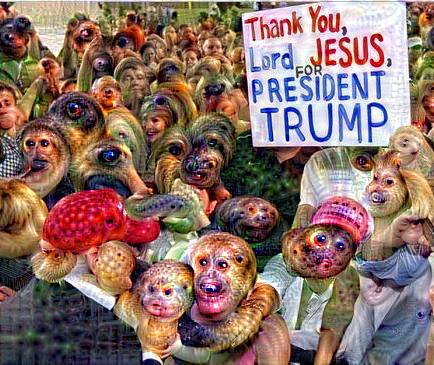 A Florida pastor who took his 11 year old daughter to see a Donald Trump campaign-style presidential rally said he'd hoped his kid would learn something, but instead witnessed that “demonic activity was palpable.”

Joel Tooley is lead pastor at Melbourne First Church of the Nazarene in eastern Florida. When he heard Trump and Melania were coming through the area, he decided to go.

“I am enough of a sentimentalist that when I found out THEEEE President was coming to town, I got online quickly and reserved two tickets,” he wrote on Facebook. “As people were coming in, there was a lot of excitement and a strong sense of patriotism.”

As the crowd sang “God Bless the USA,” some in the audience began to sing along and raise their hands to the sky as if in a holy roller church, experiencing spiritual possession.

“People were being ushered into a deeply religious experience,” Tooley said, “and it made me completely uncomfortable.

“I love my country; I honor those who sacrificed their lives for our freedom and I respect our history and what we stand for, but what I experienced in that moment sent shivers down my spine. I felt like people were here to worship an ideology along with the man who was leading it. Don’t get me wrong, it wasn’t the song per se — it was this inexplicable movement that was happening in the room. It was a religious zeal.”

“A pastor got up to pray and repeatedly prayed throughout his prayer, 'Thank you for making this the greatest nation on earth…in Jesus' name,' Pastor Tooley recalled.