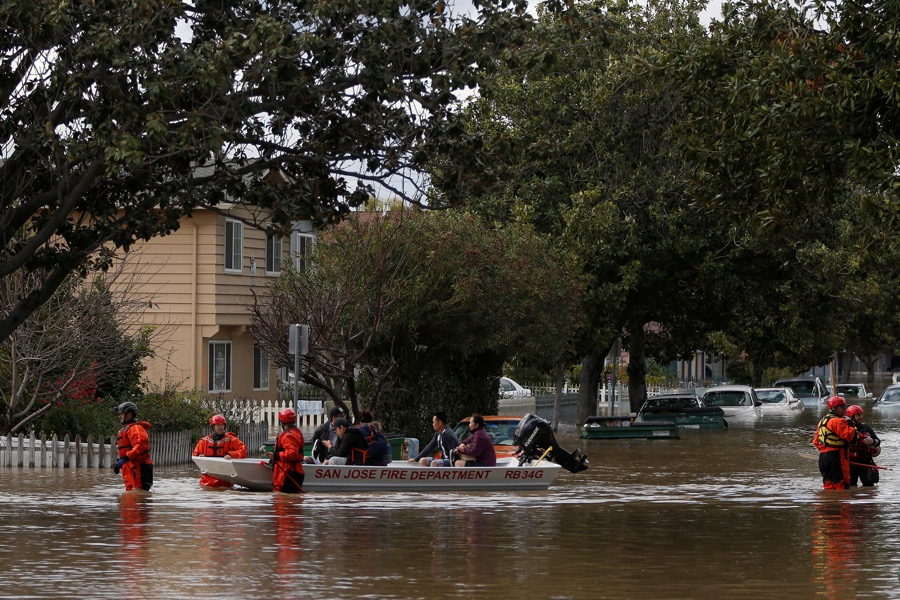 Among those who sought refuge there were 62-year-old Lien Tran and 70-year-old Tho Pham, who were flushed from their unit by knee-high waters at the South Bay Mobile Home Park off Oakland Road in North San Jose.

Tran said around 2 p.m. Tuesday, anticipated flooding prompted the lot manager to tell residents to move their cars to safer ground. But a couple of hours later, the water was faster and higher than anyone expected.

“Suddenly the water came,” said Tran, who has lived at the site for 13 years. “We haven’t had anything like this before.”

Tran and Pham fled essentially with the clothes on their backs when police came to evacuate residents and get them on a bus to the shelter. Both are wondering when they’ll be able to go home.

“Not yet,” Tran said, when asked about whether she has been given any estimate.

It was an especially challenging escape for Yuni Rho, who runs a pair of group homes for mentally disabled residents along Coyote Creek east of downtown San Jose. Rho had been keeping up with news reports and waited nervously about whether they would need to evacuate.

She and her staff prepared for the possibility, gather medications and other supplies for the 30 people they serve. By 8 p.m., the evacuation order for her region was still voluntary; by 10 p.m., it wasn’t a choice anymore.

Rho lauded San Jose police for being responsive to the special needs of her residents and commissioning a bus to pick them up. Amid all the commotion, she worked to keep everyone calm.

“It was really scary, and not all of our clients were understanding what was happening,” she said. “We just kept saying ‘It’s okay. Everybody is safe.'”

San Jose city officials declared a local emergency Tuesday, while Mayor Sam Liccardo expressed frustration that the rescued residents — from nearly 500 houses and apartments near Senter Road and Phelan Avenue — were caught by surprise. He called the flood the result of a “unique breach” of Coyote Creek that the water district would pinpoint.

“As I sit here today and look at a neighborhood that is completely inundated with water where we have fire crews doing whatever they can to get people out, there’s no question in my mind there was a failure of some kind,” Liccardo said. “We’ll have plenty of time for ‘Monday morning quarterbacking’ in the days ahead. Right now, we’ve got to do whatever we can to get people out.”

Tuesday night, residents of Naglee Park, a tight-knit neighborhood of historic homes near downtown, were already angry that they weren’t given better notice about the potential of severe flooding. Sandy Moll, whose house on South 16th Street near William Street Park flooded, said she had prepared for about a foot of water, but no more. The force of the water from the creek that runs behind her house broke down her back door.

“My furniture is floating in the garden. The sandbags were three feet high and the water bowled those over,” Moll said as she stood with neighbors on the street looking at the rising waters at 9:30 p.m. “If anyone said two or three days ago that this could be as bad or worse than 20 years ago — I’m seething. It’s the lack of information and forewarning when they had to have known. They never even said you need to prepare for a major flood.”