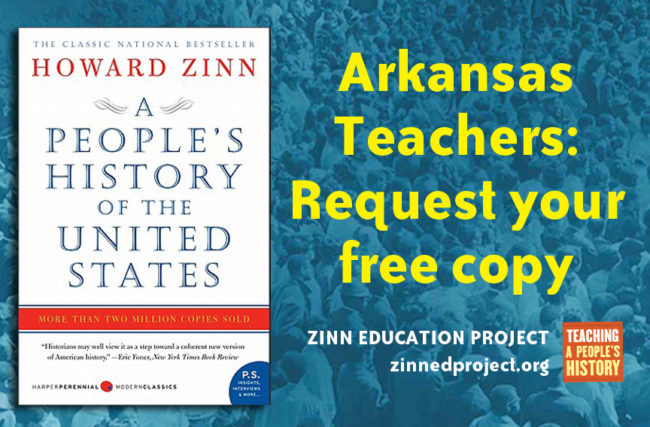 The Arkansas legislature is considering a bill that would prohibit "any books or other material authored by or concerning Howard Zinn" in its schools, on the grounds that Howard Zinn says means things about America, like, "It has the kinds of censoring, undemocratic state governments that ban all books by and discussions of critics of America and its actions."

Howard Zinn (who died in 2010) wrote the bestselling and brilliant People's History of the United States, which has been adapted into many equally brilliant other formats. My two favorites are the graphic novel and this collection of dramatic readings of primary source material from people who resisted oppression and fought for justice (for example, James Earl Jones reading "The Meaning of July the Fourth for the Negro" by Frederick Douglass.

Cowardly legislatures have been attempting to ban Zinn for years: in 2010, Indiana tried it; in 2011, Tuscon succeeded, getting A People's History yanked from the city's Mexican American studies curriculum.

The nonprofit Zinn Education Project is offering free copies of A People's History, along with classroom materials, to all Arkansas teachers.

With the legislative proposal to ban “any books or other material authored by or concerning Howard Zinn,” the Zinn Education Project is offering free copies of A People’s History of the United States and people’s history lessons to teachers in Arkansas. We are inspired by the Librotraficante who delivered books to schools in Tucson, Arizona, in defiance of the ethnic studies ban.