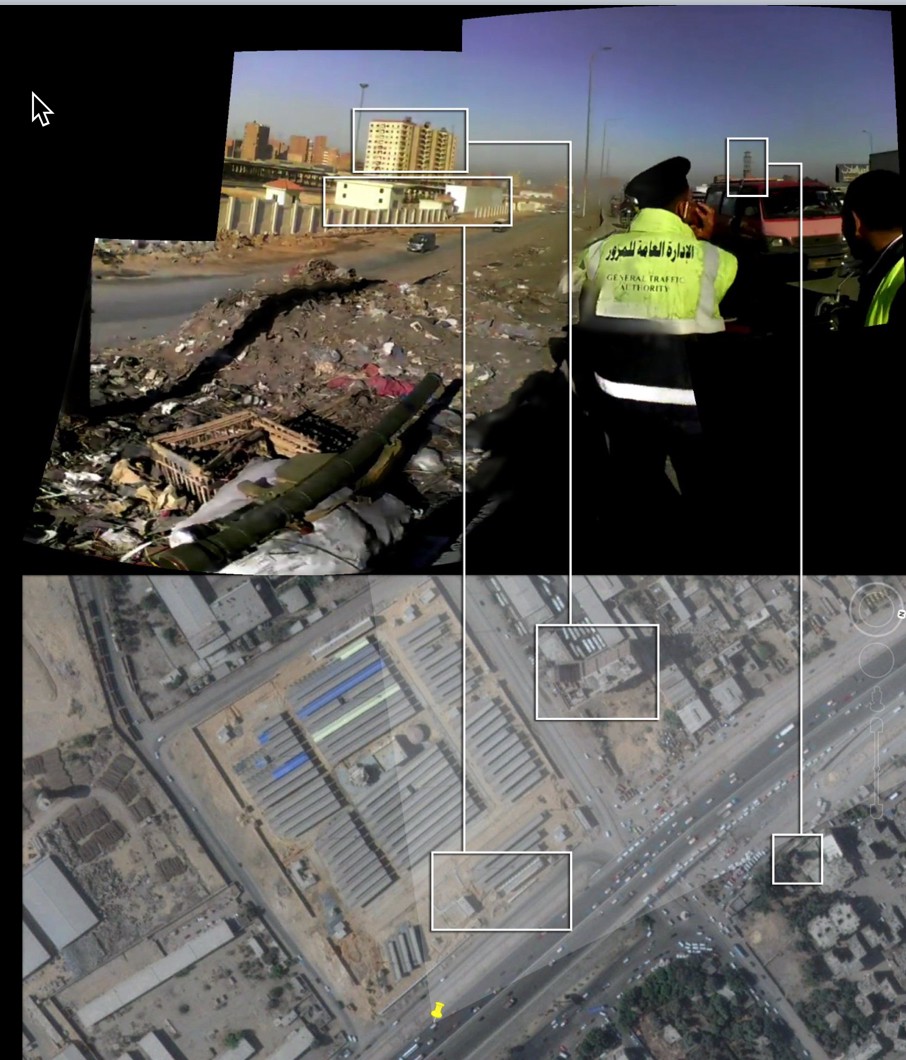 Henk van Ess teaches workshops in online investigative techniques; he worked with colleagues and a team of students from Axel Springer Academie to analyze a viral news video that purported to show a discarded missile launcher that had been discovered near Cairo's international airport in 2011, but only published last month.

Van Ess presents a case that the video is a fake, produced in 2017 and then back-dated to make it look like it was recorded in 2011. To date the video, his team tried a variety of clever techniques, from dating the models of cars found in the video to a phone and battery pack visible in the hand of a police officer. Ultimately, he gets his evidence by stitching together frames from the video to make a panorama from which he is able to isolate some distinctive buildings, which he believes he's located on historical satellite images; by analyzing a time-series of satellite images of those buildings, he's able to date the video to no earlier than late 2016.


On the way, van Ess shows how he can use public sources and advanced Google and Facebook techniques to identify the purported source of the video, tracking him to his seeming home and uncovering biographical facts about him even though he has closed down his Facebook account.


Regardless of whether you care about this missile launcher, it's a fascinating look at the difficulties of tradecraft when it comes to hoaxing the news, and presents a counterpoint to the "in the future, all fakery will be seamless" narrative that 2016's many partisan news hoaxes spawned.

“To be fair with you, this was a rather advanced video to geolocate. The first thing I did was looking for the claim where it could be, in this case near the international airport of Cairo. Then it makes sense to start in the area around the airport. Are there any Arabic words that could give away further details about the location? No. Are there visual clues? Yes: a tower, a building, and a road. They are not significant landmarks like the Eiffel Tower, but it is a start. No luck finding a similar tower in the vicinity of the airport on Panoramio. What else I can try to narrow down the location? Someone on Twitter said the video must have been taken along the Ring Road, a highway with a service road. I gave that a try.. and was lucky! Each and every building, the street, the wall, and the two ‘gates’, the market-like structure, and the tower matched exactly with satellite imagery. This is advanced geolocation, simply looking at many different streets and buildings until you think.. “Wait a second, this may be it..” — and it this case, it was indeed the correct location.”

Inside the trenches of an information war
[Henk van Ess/Medium]