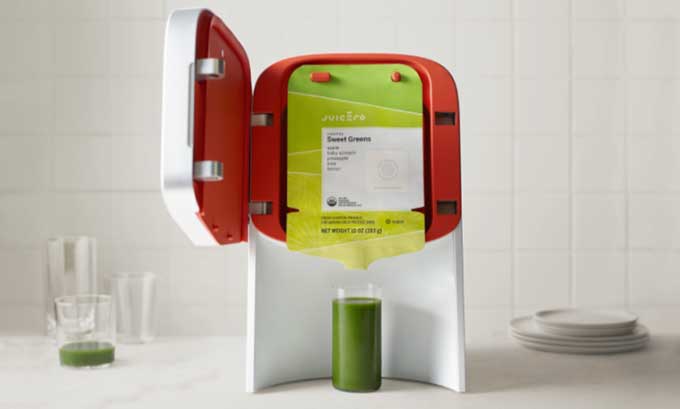 This has been out for a while, but my IFTF colleague Brad just told me about it last week. It's the $400 Juicero juicing machine. To make juice with it, you must subscribe to receive pre-masticated produce that comes in packs (priced between $7 and $10 per pack, $35 to $50 per week). The packs are marked with a QR code that the Juicero scans to make sure it is "fresh." If the pack gets "out of code" (i.e., it's produce you grew, traded, or brought elsewhere) the Juicero will reject it. It's got a built-in Wi-Fi radio, which checks the date (and monitors your use of the juicer). The machine itself seems pretty neat - it presses the juice by squeezing the fruit, but they really need to let you use your own produce.

If this appeals to you, here's a smart floss dispenser you'll probably like.

UPDATE: A spokesperson for Juicero sent me an email, asking me to make some corrections to the piece:

-The QR code is not to ensure you don’t use your own produce, it’s there to ensure that the produce is fresh, quality and to help consumers manage their Pack subscriptions. We don’t use any preservatives or additives, just fresh, organic produce, so the QR code ensures that the produce in the Packs is within the approx. 6 day shelf life. It also help you manage your Packs by enabling the Juicero App to remind you when your Packs are about to expire. We know that no one wants to waste produce.

-“Pre-masticated produce” would literally mean pre-chewed, which is definitely not the case. The produce inside the Packs is triple washed and finely chopped to optimize the amount of juice you can press from each Pack.