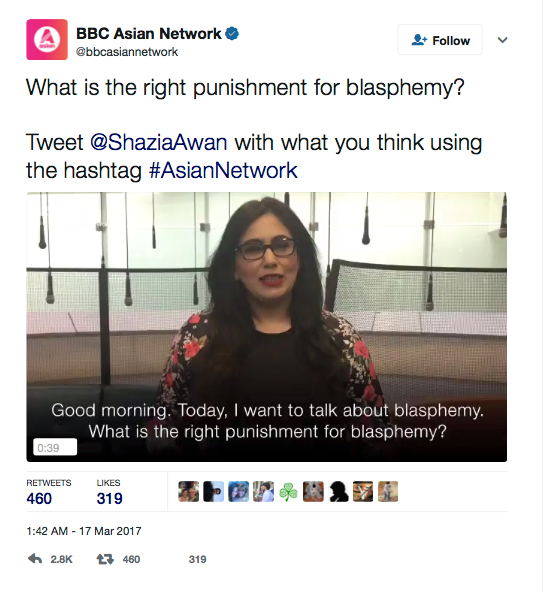 BBC Asian Network raised a few eyebrows after tweeting "What is the right punishment for blasphemy?" While it's clear from watching the video all the way through that BBC's Shazia Awan is not taking a side, BBC Asia later apologized.

Good morning. Today, I want to talk about blasphemy. What is the right punishment for blasphemy? I want to talk about this because Pakistan have asked for the help of Facebook to crack down on blasphemous content on the site. Facebook have even agreed to send a team out there to help. Meanwhile, Prime Minister Nawaz Sharif has said he supports this crackdown. On the party's official Twitter account, it's called blasphemy and unpardonable offence. Do you agree with this? Is this the right way to handle blasphemy? Or do you think that freedom of speech should trump all else.

They followed up after getting considerable negative response:

"Apologies for poorly worded question from #AsianNetwork yday. Q was in context of Pak asking FB to help we shd have made that clear we never intend to imply Blasphemy should be punished. Provocative question that got it wrong."