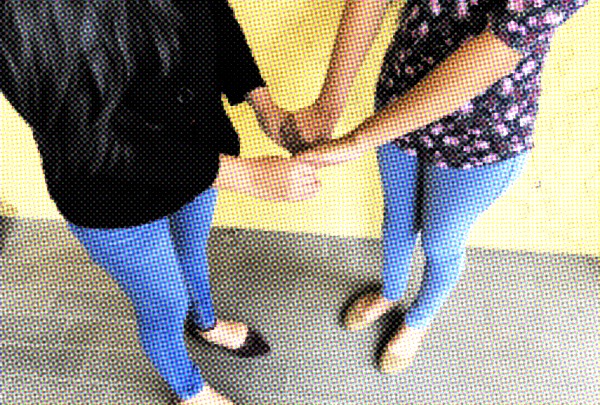 Two sisters who were trying to escape violence and poverty in Guatemala for a better life “became so desperately lost trekking across the Texas desert that when they saw a U.S. Customs and Border Protection truck, they waved for help,” reports the Los Angeles Times. An officer in that truck later confined them by force, and sexually assaulted them, one by one.

You can read the young women's story at the ACLU of Northern California's blog. A version in Spanish is here.

A snip from the Los Angeles Times:

[T]he sisters, age 19 and 17, claim that they were taken by a Border Patrol officer to a closet in the Presidio intake office, where he forced them to strip and sexually assaulted them in July 2016. Attorneys for the American Civil Liberties Union of Northern California filed legal claims Tuesday against the Department of Homeland Security on behalf of the sisters, now living in Fresno with their mother.

The claims, seeking $750,000 in compensation for each sister, describe in graphic detail the alleged molestation by the Border Patrol officer, whose identity remains unclear.

“What happened in that closet has caused me so much pain and sadness,” the older sister said.” I’m telling my story because I don’t want anyone else to go through this. I hope the officer will be honest about what he did and take responsibility for his actions. This is the only way we’ll be able to ensure this never happens again.”

“CBP must be held accountable for its officer’s sexual abuse of these vulnerable victims,” the LA Times quotes an ACLU rep. “There has been no criminal prosecution against the officer involved. CBP is not above the law, and its abuses of power must not be tolerated.”

A Customs and Border Protection rep declined to comment on pending litigation, but said,

We take allegations of misconduct seriously and there is no room in CBP for the mistreatment or misconduct of any kind toward those in our custody. We do not tolerate corruption or abuse within our ranks, and we fully cooperate with any criminal or administrative investigation of alleged misconduct by any of our personnel, on or off duty.

One of the two teen victims says in her account at the ACLU blog:

The shame and hurt we felt in that room are indescribable. The thought of an immigration enforcement officer touching my most intimate body parts without my consent breaks me. I have suffered every day from this experience that it has been extremely hard to sleep at night. There have even been some days when I feel like I shouldn’t be alive.

I’ve been having regular counseling sessions, which have helped a lot. But I want this officer and any other CBP officer who commits this kind of abuse to be punished.

When I first reported the incident, it took all of my inner my strength to reveal what had happened. I recounted the episode, and my sister and I later provided written statements. They even made us draw a depiction of the closet where it happened. But finally, after everything, I don’t believe the CBP officer was even disciplined.

That is why today, my sister and I have chosen to file a claim against the officer. We’re doing this with the hope that no one else will ever be sexually assaulted by CBP officers, or any law enforcement. Telling this story isn’t easy for me, but I want to help others that are thinking of crossing the border. What happened to us is NOT normal; it is NOT part of protocol; and it is NOT legal. No one, no matter the situation or their background, deserves to go through this.

Since the incident, I’ve come to learn that Customs and Border Protection is the largest law enforcement agency in the United States and, through the ACLU, that many children trying to escape from trauma and abuse in their home countries often experience additional abuse and mistreatment in the hands of these U.S. border agents. Unfortunately, few people know this. CBP often refuses to own up to its actions and hides the reports of abuse and doesn’t reveal if officers are disciplined.

I hope to forget what happened to us and move on. But this border officer and CBP need to be held accountable.