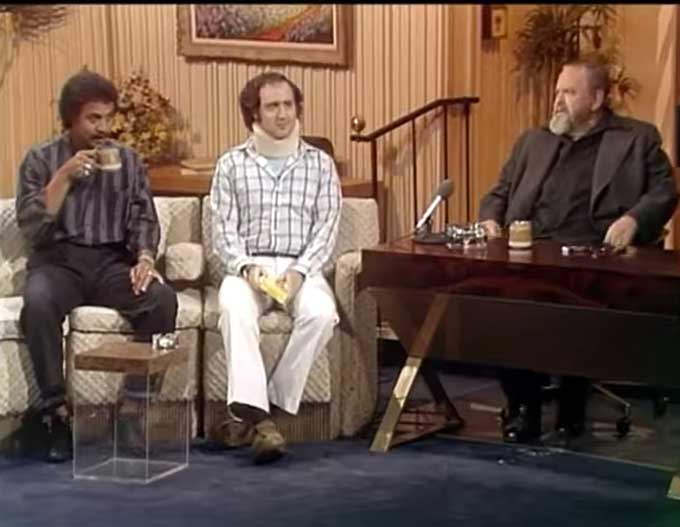 I was expecting this to be a train wreck, but Orson Welles (in an unusually ungrumpy mood) did a terrific job of interviewing Andy Kaufman, who was always a tough nut to crack. Welles basically took over and did most of the talking and was very funny.

A super-cool robotic bartender inspired by Blade Runner’s Voight-Kampff machine? With an ordering menu screen that shows old Japanese whisky ad starring Orson Welles (giving a “dash of Tokyo-dystopian-future-retro weirdness”)? Yes! Enter the VK-01 Off-World Bartender. Its creator, Donald Bell of Maker Project Lab, explains: The year is 2040, and you could use a good […]

Come November 2, you will have the opportunity to see Orson Welles’ final film on Netflix and in select theatres, a work titled The Other Side of the Wind. Netflix purchased the footage in March 2017, nearly 50 years after this “notoriously unfinished” feature began production. In 1970, legendary director Orson Welles (CITIZEN KANE) began […]

We Will Sell No Wine Before Its Time! Previously: Orson Welles hates the advertising copy he’s been asked to read. If you enjoyed this video, Publio Delgado’s weirdly harmonized guitar backing is an essential accompaniment.