This sky pool lets you walk on air (in water) 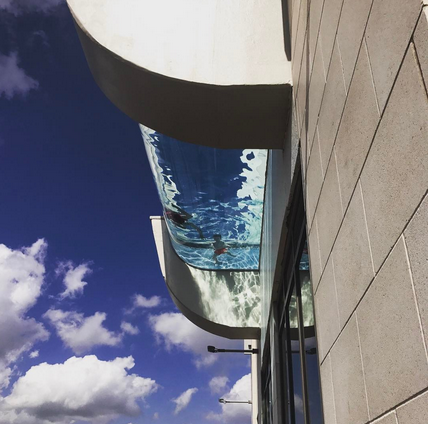 At a Houston apartment complex called Market Square Tower, residents can walk on air (in water) via a glass-bottomed pool suspended 500 feet in the air.

This video filmed in the pool is one of the most terrifying and amazing things I’ve ever seen:

Here are some photos of the pool from other angles:

Swimming in the sky! This is the view from the balcony of our South Penthouse 🌊☁️ We have 4 Penthouses available for lease. #MarketSquareTower #luxury #highrise #houston #TallestPoolInTexas

Thanks to the @houstonchron for the wonderful write up! Read more here: https://goo.gl/ifRhxA #MarketSquareTower

Learn all about the tallest pool in #Texas and Houston, Texas's first sky pool in the Houston Business Journal. 📸: @houbizjournal Call our leasing office at 713.777.7000 for more information. Read more below/here: http://www.bizjournals.com/houston/news/2016/11/04/sneak-peek-look-inside-houstons-first-sky-pool.html?ana=fbk #MarketSquareTower

It's never too early in the year to soak up the sun at Market Square Tower's sky pool. We dare you to hang out in the glass bottom section that cantilevers 500 feet over. [photo credit]: @j_mo55 #DowntownHouston #poolparty #highriseliving #MarketSquareTower

And here’s footage of the pool being constructed: