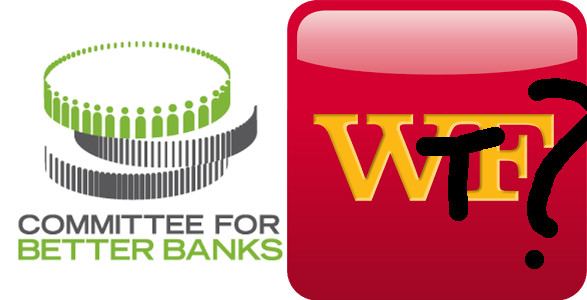 For decades, Wells Fargo pressured its employees to commit millions of acts of fraud against its customers, using threats and blackballing to terrorize low-level employees.

But the crimes only came to light because of union organizers from the Committee for Better Banks, which has been the relentless in blowing the whistle, spurring the press to take notice and the US government to take action.

CBB hasn't let up, either: they're gunning for Tim Sloan now: he's the Wells Fargo lifer from executive row who got parachuted into the CEO's seat after CBB hounded his predecessor, the disgraced subprime fraudster John Stumpf out of office. Sloan looks like he's every bit as dirty as Stumpf, which makes sense, since he'd previously served as COO and directly oversaw the fraud.

But Sloan’s appointment did little to mollify critics, given his central management role during more than a decade of consumer and community complaints. In 2015, Sloan was promoted to Chief Operating Officer, a post that made him the executive responsible for Wells Fargo’s Community Bank and Consumer Lending divisions—ground zero in the scandal. Among other duties, Sloan was in charge of supervising Tolstedt, who ran Wells Fargo’s community-banking division at the center of the current firestorm.

“Getting an apology when the company is backed into a corner doesn’t fix how Wells Fargo’s predatory, high-pressure sales goals hurt millions of working people and their customers,” said Erin Mahoney, a spokesperson for CBB said after the bank put Sloan in charge. “If Sloan really wants to rebuild trust within the company, he should start paying frontline workers a fair wage and working with them to collaboratively to improve working conditions and serve the best interests of employees and customers.”