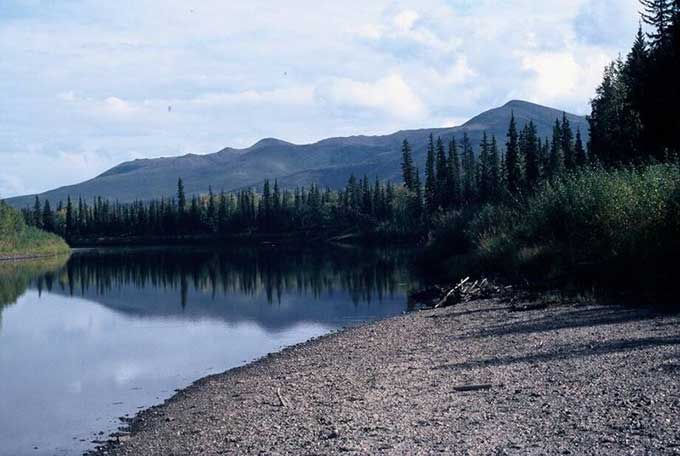 Photographer Ed Gold went deep into the Alaskan wilderness to meet the Atchley family, who have lived there in near-isolation for 18 years. The family of four buys groceries once a year, and live off the land by hunting black bears, wolves, rabbits, ducks and beavers.

The family keep their own time to suit their needs, putting the clock as much as three hours forward or back depending on the light.

They generally eat breakfast at 16:30, spending the short winter daylight hours busy with carpentry, cleaning and repairs. After supper at about 22:00, they fill the rest of their day with talking, guitar playing and writing, going to bed around 04:00.

If they feel short of money, 52-year-old David will sell tanned hides, build log cabins or take work in the local gold mine, about 100 miles away.

Romey Atchely is also an author. From her bio page:

For fourteen of her past nineteen years in Alaska, Romey Atchley has lived with her husband, David, and two sons in the Nowitna National Wildlife Refuge. They are the only people living in this remote natural wilderness area. Their cabin is over two hundred miles from the nearest road—beyond access to schools, doctors, and grocery stores. Romey and her family live among the wild animals where they hunt, fish, garden, tan hides, and home school their children. Through her writings, drawings, and photographs, she brings her wilderness experiences to life for others to share. From the Alaskan Wilderness: The Adventures of Barefoot and Boofoot is the first in a series of Romey Atchley, look out for her next book, “From the Alaskan Wilderness: The Adventures of Barefoot and Boofoot,” Summer, In Which Boofoot Finds His Herd.

Alaska / living off the land

Watch the trailer for High Score, Netflix's upcoming documentary about the history of video games

On August 19th Netflix is premiering its 6 part documentary on the history of the video game industry. Above, the trailer. Below, the opening credits clip

This 1962 illustrated book imagined what space stations would look

One of my favorite websites is John Sisson’s Dreams of Space, which is singularly focused on vintage non-fiction children’s books and ephemera about space travel. Most of the stuff he posts is from the 1950s through the 1970s, a heyday for pie in the sky visions of humans breaking free of earth’s wicked gravity. This […]

Enjoy this whimsical 1991 TV commercial for the Gameboy

This 1991 television commercial for the Nintendo Game Boy looks like it borrowed a bit of Terry Gilliam’s look from Brazil. It’s interesting that the Game Boy was being marketed to adults and not kids and teenagers. Image: YouTube