A handbook, a cookbook, an eggbook: this quasi-encyclopedic ovarian overview is the only tome you need to own 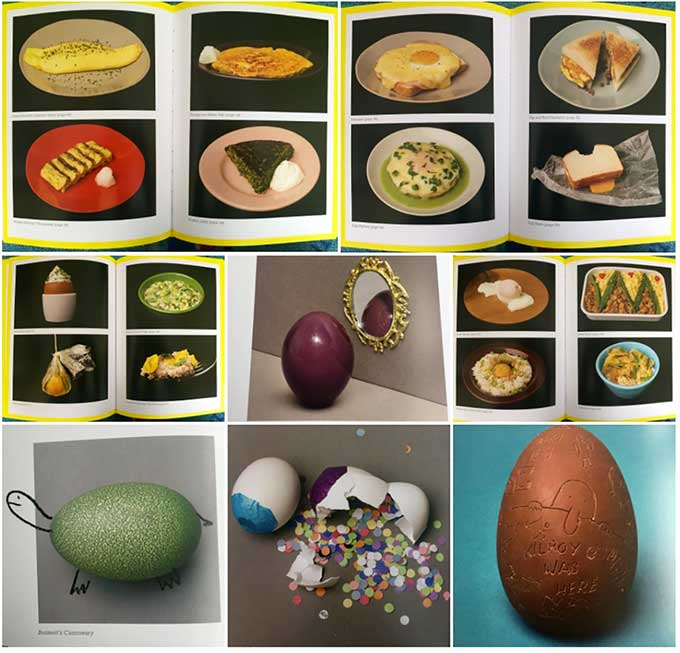 There is something irresistibly gross about Lucky Peach food photography. The bizarre lightening and color correction, the styling that fluctuates between offbeat and grotesque. It’s so weird, it’s amazing. Aside from it’s unique visual appeal, Lucky Peach is consistently packed with culinary expertise and damn good journalism. Though the magazine will soon be gone, the brand’s fourth (and presumably final) book, All About Eggs, embodies everything that was great about the publication compiled in a kelly green hard cover.

All About Eggs really is all about eggs. It examines the egg from every angle. There are essays on the evolution of the egg tart in Asia, an egg-fueled murder in a San Francisco diner, and the egg throughout time. There are guides on deciphering egg carton labels, egg varieties, and egg substitutes. The bright yellow yolk at the center of the book houses strangely photographed finished recipes ranging from deep fried Filipino Kwek Kwek to classic, crisp French Meringues. The egg white pages on either side of the recipe section are generously peppered with egg photo illustration—egg art objects, repurposed egg shells and cartons, egg ephemera, and many, many altered photos of eggs (anthropomorphized, animalized, and otherwise reimagined). If you are at all interested in eggs, you need this book!

All About Eggs: Everything We Know About the World's Most Important Food

by Rachel Khong, the editors of Lucky Peach

Fresh Made Simple: A Naturally Delicious Way to Eat: Look, Cook, and Savor

Despite making a weekly meal plan, we eat at least one dinner a week out of the freezer and often ditch another well-planned meal for something quick and easy. Lauren K. Stine’s recipes in Fresh Made Simple are not only great for fast, fresh, mid-week eats, but also for quick, clean snacks and spreads to […]

Say you’ve ditched your frozen dinners, gotten swept up in foodie culture, and, with new found enthusiasm, eat out and order seafood. You wax poetic about the merits of sustainable fish farming, but your smile suddenly wanes when your server brings the fish — whole. Or maybe you’re a college student embarking on your very […]

I pretty much sprinkle the same thing on every meal. I am admittedly heavy-handed with the cayenne on my own plate and rarely stray from the variety of basils I grow in the summer or bundles of dried rosemary in winter when cooking for my family. I am much more apt to get creative with […]