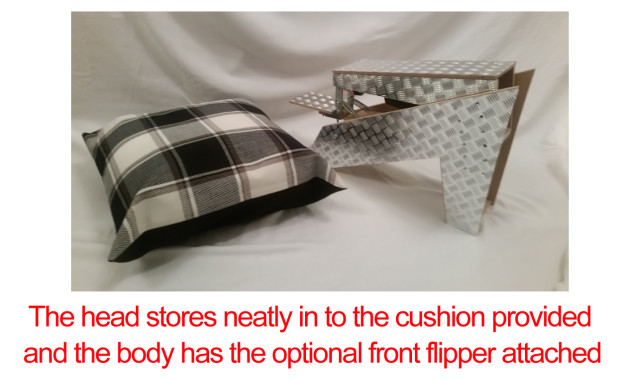 Today in Poe's law comes an advertisement for "Arlan Robotics Service Droid 1.0" (NSFW), which is basically a nightmarish silicone parody of a woman's head mounted on a machine that lurches back and forth like a Victorian automaton bobbing for apples. I thought it was a parody, but technical features are demonstrated ("stop with a single hand", "suction on demand") that indicate otherwise.

And there's an Indiegogo campaign:

I modeled head movement from the neck and tried to replicate the perfect motion that is so pleasurable in actual human contact. This is not a straight forward/backward action in practice but a gentle rolling coupled with the in and out movement so that the pressure shifts slightly during motion.

Anyone who has felt that gentle rhythmic brushing of the forehead on their chest as the hair swishes back and forth over your thighs will understand how important this is. ...

... the current products on the market were very sterile and functional, plastic tubes or mechanisms with no thought on the physical reality of sharing this moment with another individual. There was only ever one solution to this and that was housing the internals inside a human shaped head.

This delicate scene cannot be matched by cold plastics or media. You need to feel that sensation of glorious hair spilling over and flowing on to your body or taking hold of that soft shampooed ponytail and pulling it in to you to truly capture that act.

The head stores neatly into the cushion provided.

Arnold Schwarzenegger robot won't be terminating anything yet

Created by Promobot, a startup in Russia, this electronic Arnie isn’t going to be murdering its way through all the Sarah Connors in the L.A. phonebook. It might find its way into a few nightmares, though. Below, the same Arnie headbot on the CES 2020 show floor.

Robotic employees such as hotel concierges and English teachers are nothing new in Japan, but here is its first robotic bartender. QBIT Robotics created this chatty robot that works in one of Tokyo’s Yoronotaki izakaya restaurants.